My Account My Profile Sign out
My Account
Search
Worldwide Europe United Kingdom England London Jessie Buckley: ‘I don't want to be anywhere near a spotlight’
Advertising

Jessie Buckley first appeared on the BBC at 17. Not as an extra in a period drama but in the talent show ‘I’d Do Anything’. She came second. ‘It feels like a whole other life,’ she admits. Twelve years on and the Irish actress has now made period epics for the Beeb (‘Taboo’, ‘War & Peace’) as well as the leap into movies with last year’s ace thriller ‘Beast’. In her latest film, ‘Wild Rose’, she plays a single mum from Glasgow chasing her musical dreams. Turns out coming second opens plenty of doors.

You play a wannabe country star in ‘Wild Rose’. Ever met any of your music heroes?
‘When we wrapped in Nashville, me and a friend did a road trip and I met Bonnie Raitt. I sat in the audience and wailed. When I went backstage to meet her, I couldn’t even string a sentence together.’

What was your favourite scene to shoot in the film?
‘I really loved singing [Chris Stapleton’s] “Outlaw State of Mind”. It just was a massive party. All the hen party extras were having a blast.’

Who were the hen party extras?
‘Women we’d met on the estate in [Glasgow suburb] Maryhill. I was going to set one day and they were all hooking themselves up to Irn-Bru and vodka. They were like, “Come and have a drink!” When I came into work the next day, they’d brought me doughnuts and gin. It was only right I brought them down.’

‘Some local women brought me gin on set, so it was only right to get them in the movie’

Was it hard to master the accent?
‘I was really scared so I worked on it for three or four months, including a month based in Glasgow, before filming. I’d speak in a Glaswegian accent and hope that I’d be able to order a bag of chips.’

Did you pull off the subterfuge?
‘I think so. They didn’t go: “You’re lying!”’

There’s a lot of talk about you being on the verge of something big. Do you ever think about stuff like that?
‘I don’t really know what that is. I feel like I’ve had loads of moments – like when I got into Rada or getting the part in “Beast”. Everything adds up.’

What do you think about fame – do you want to be in the spotlight?
‘I don’t want to be anywhere near a spotlight! Only if I’m performing. It doesn’t really affect my life. I cycle, I go swimming, I cook with my flatmates, I go out dancing. I live a pretty normal life.’

You grew up in Kerry. Do you get homesick?
‘Yeah. I’m very close to my family and it can be lonely if you’re travelling around on jobs. We live in a very natural, really beautiful place with mountains and lakes and stuff. I really miss that rootedness.’

Do you think of London as home now?
‘I do. But I miss nature and being by myself sometimes. I live near the canal in east London, so I like running there. I don’t know if it will be my home for ever.’

Any favourite places in London?
‘There’s a bench outside a restaurant on Columbia Road called Brawn which does excellent Aperol spritzes. I’ve spent many an afternoon on that bench.’

You have loads of films coming out, including ‘Judy’ with Renée Zellweger. What was the best moment on set?
‘We filmed a scene in a theatre in Hackney and she was singing “Somewhere Over the Rainbow”. I was standing beside [co-star] Michael Gambon and he was streaming with tears. I was crying too.’

You’re also in ‘The Voyage of Doctor Dolittle’. Are you voicing an animal?
‘No, I’m playing Queen Victoria. I was only on set for two weeks.’

Did you want to be one of the animals?
‘Yeah. What would I be? Probably a squirrel. I’m quite squirrelly. I like eating nuts [laughs].’ 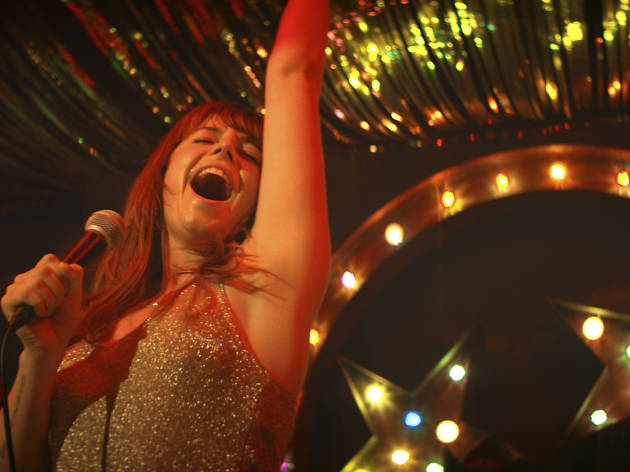 Want more movie magic? Here are the best films to see this month