Like a second blast of raw social conscience, Ken Loach’s new film ‘Sorry We Missed You’ follows ‘I, Daniel Blake’ with another Newcastle-set drama about people struggling at the very edge of their means. The characters at its core – delivery driver Ricky (Kris Hitchen) and his carer wife Abbie (Debbie Honeywood) – are our entry point into a bleak new economy. It’s a heartrending tale suffused with all the veteran director’s usual humanity and warmth. As he tells me, he’s not giving up filmmaking just yet. He just needs to sort the garden out first.

What was the spark for this story?
‘It was visiting food banks on “I, Daniel Blake” and realising that a lot of people who were going were actually working. Jobs have gone from being secure to insecure, and new technology means people are just exploited harder.’

Did the real-life case of driver Don Lane, who died while working on a zero-hours contract, influence you at all?
‘We didn’t know about that when we were doing the film. Don’s case was shocking – more extreme than we show in the film – and we met his wife, who’s a brave woman. [Screenwriter] Paul Laverty went to meet lots of drivers and drove around with one or two.’

Ricky drives a white van. Did you see the film as a corrective to the stereotype of ‘white van man’?
‘It wasn’t consciously that we were fighting a stereotype, although I suppose we were. It was just focusing on the people doing the work and seeing how knackered they are.’

It’s very stark to see him carry a bottle with him because he doesn’t have time to stop for a pee.
‘The controlling of the driver is down to the last minute and they don’t allow time for him to go to the lavatory. It strips people of their dignity.’

‘Movies should be a whole library. Hollywood is offering airport novels’

You famously ask your actors to react to scenes that they’re not entirely prepared for. Does that work out well?
‘It pretty well does. If one shot goes wrong, you just do it again. It’s very pragmatic, really. The key thing is you take [the actors] through the story: you start at the beginning and finish at the end, so they go on a journey. Shooting chronologically is fundamental. We’ll give them the script, because sometimes it’s quite a bit to have in your head, but the first time they say it to each other we shoot and we work on it during the day.’

Do you think cinema is doing enough to flag social issues?
‘The balance is never right, but it’s not just social realism versus superheroes. We could have a range of films that’s as broad as a library, but instead, you have a very small section of airport novels. Because they’re made as commodities, they’re not made to communicate.’

You filmed in Newcastle. Do you feel a strong bond with the city?
‘It’s a brilliant place to work – the people are very welcoming. We did want it to be seen as a companion piece to “I, Daniel Blake”. Did I pick up any Geordie slang? I won’t patronise them by trying to do it.’

Kris Hitchen as Ricky in Ken Loach’s ‘Sorry We Missed You’. Photograph: Entertainment One

You’ve talked about retirement in recent years. This doesn’t feel like the film of a man losing...
‘…his marbles?’ [Laughs]

I was going to say his passion for filmmaking.
‘No, this was a story Paul [Laverty, the screenwriter] and I felt compelled to tell. Have we talked about our next project? Not really. I’m going to sort the garden. It’s in a bit of a state.’

Does it feel like a strange time to release the film?
‘Very strange. Brexit is a distraction but it goes to the heart of what we’re talking about [in the film]. The free market is causing these problems but Boris Johnson and his gang will intensify them. I voted for remain but it’s a difficult issue.’ 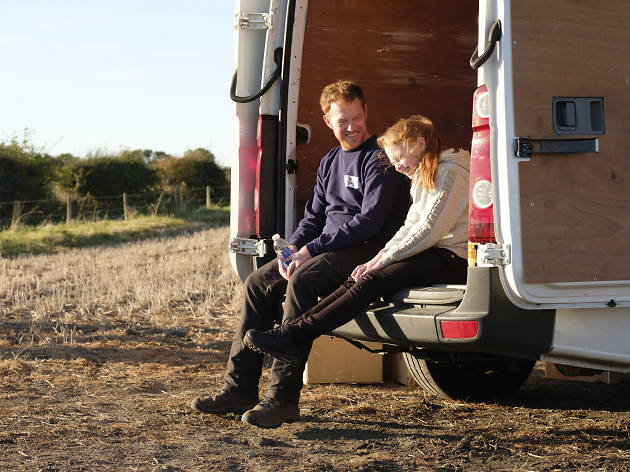