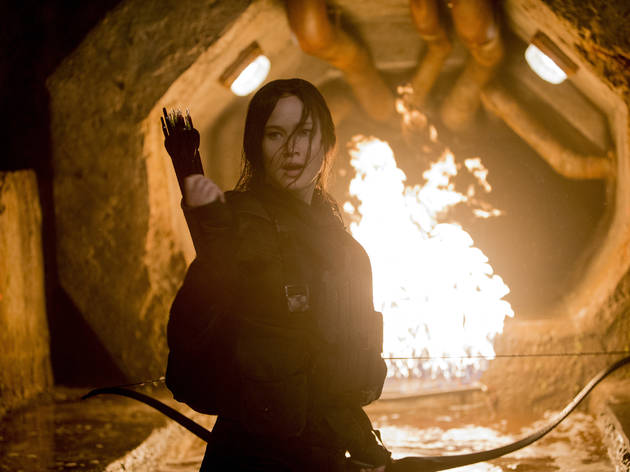 So here it is, the triumphant finale to ‘The Hunger Games’ franchise, and time for plucky heroine Katniss Everdeen (Jennifer Lawrence) to march proudly into the Capitol, aim her trusty arrow and loose it straight into the heart of that dastardly villain President Snow (Donald Sutherland). A rousing cheer, and we all go home satisfied. Except that ‘Mockingjay – Part 2’ isn’t that movie. This might be the most downbeat blockbuster in memory, a film that starts out pitiless and goes downhill from there, save for a fleeting glimmer of hope in the final moments. It’s a bold statement about the unforgiving nature of war, unashamedly political in its motives and quietly devastating in its emotional effect.

The action picks up right after the end of ‘Part 1’, with Peeta (Josh Hutcherson) suffering hallucinations brought on by Snow’s torturers and Katniss kicking against the restrictions placed on her by rebel leader Coin (Julianne Moore). The first half runs along fairly predictable tramlines, as Katniss slips her captors and joins the fray, bent on taking Snow down. There’s a truly nightmarish tussle in a sewer tunnel – the series’ most effective action sequence, hands down – and then it's on to Snow’s mansion for the climactic showdown. But just as the end is in sight, everything shifts. We won’t spoil things, except to say that the choices made are truly striking, simultaneously reaffirming the series' commitment to timely political point-making while providing an off-key but oddly satisfying sense of closure.

Some will find the wrongfooting nature of the final scenes off-putting, and the pace can be ponderous. But it's genuinely powerful, thanks in large part to a peerless cast: Lawrence has rarely been better, and she’s matched – unexpectedly – by Hutcherson, delivering a peculiarly soulful turn. Stanley Tucci, Jena Malone, Woody Harrelson and Elizabeth Banks all make the most of their fleeting appearances – there’s a brief moment between the latter two which is simply beautiful. But it's one other bit-player who makes the biggest impact. This is Philip Seymour Hoffman’s final film, and, though his scenes are few, it’s an oddly fitting, heartfelt, sad-but-hopeful swansong.