Barry Keoghan makes a lot of lists. He’s done it for years. If he wants something to happen he will add a note on his phone because, he explains, ‘if I write it down I’m sure it will happen’. Sitting in the courtyard of Somerset House, where the sound of a nearby fountain is niggling at the edges of his hangover, Keoghan turns his phone round to show me his list of lists: favourite directors, personal goals and many, many others. It sounds a bit hippy-dippy, but his list theory has often come good. In 2016, Keoghan wrote that he would be in one of the biggest films of 2017. Later that year he was cast in ‘Dunkirk’. After watching Bart Layton’s documentary ‘The Imposter’ countless times, Keoghan added him to his list of ‘Must-Work-With Directors’. He’s now one of the leads in Layton’s new movie, ‘American Animals’.

It’s a very odd, very brilliant film. Based on the real story of a group of young men who decided, for no real reason, to rob a library of some incredibly valuable books, it’s part documentary and part narrative film. Keoghan plays Spencer, a well-mannered nice guy who knows he’s involved in something stupid but doesn’t stop it. The real Spencer appears in interview clips, peppered through the story, and even briefly crosses into the fictionalised part. ‘It’s basically this new genre Bart’s creating,’ says Keoghan. ‘It’s unreal. So clever.’ The madness of the movie needs rock-solid performances to steady it and Keoghan gives a belter to add to an increasingly impressive CV.

Keoghan wants to be ‘one of those actors that people talk about, where people are fascinated by what you can do. Like Leonardo DiCaprio, Daniel Day-Lewis, Tom Hardy, Paul Newman.’ He’s well on his way, already an actor whose name on a cast list guarantees you’re in for something interesting and unpredictable. If you saw him in last year’s ‘Killing of a Sacred Deer’, as a deeply creepy boy who ruins Colin Farrell’s life, you’ll remember a performance that was terrifying because it was impossible to guess where it would go from one second to the next. Being merely very good is not enough for him. ‘I always believed,’ Keoghan says, ‘that I could be one of the greatest actors of my generation.’

Keoghan as ‘The Killing of a Sacred Deer’s mysterious Martin

If that sounds cocky, it doesn’t come across that way when he says it. It’s self-belief, which is something he’s had since he was a kid. He had to because there were precious few people around to have belief in him. Born in Dublin in 1992, Keoghan had a difficult childhood. His mother died from heroin use when he was 12 and Keoghan and his brother spent the rest of their childhood in foster homes. He used to sneak out of school and watch old films, the work of DiCaprio and Newman catching his eye, making him see acting as something powerful, something he might like to do. After trying his hand in a Christmas play, he decided to give it a more serious go. It was then that the lists of goals started.

‘I haven’t talked about it before, but it was losing my mother and stuff,’ he says of the motivation to put his aspirations down in writing. ‘It was a fear of losing something again. Foster care didn’t help because it was getting close to families then being taken away. [The lists] come down to organisation. I’m trying to get control of something and have an overview of it.’

He talks about his background because he wants kids from similar backgrounds to realise that their dreams can happen. ‘It’s very important for me to show younger kids that when opportunities are there you have to jump on them. Or create something.’

‘I want to set up my own boxing club, I want to direct a movie,
and I want to get a wolf and an eagle’

Keoghan’s next big project is the lead role in a TV adaptation of the comic book ‘Y: The Last Man’, about the only male left in a post-apocalyptic world. As with everything he does, there’s an element of future-planning to the choice. ‘After a good TV series the rise [in opportunities] can be magnificent,’ he notes. ‘This was a strategic choice.’

The lists are getting rapidly ticked off, but there’s plenty still to do. He wants to work with Paul Thomas Anderson, Lynne Ramsay, Andrea Arnold and Martin McDonagh. ‘And I want to set up my own boxing club. Direct a movie. I want a happy family. I want to get a wolf and an eagle.’ An eagle? ‘Yeah, they’re my favourites!’ He’ll probably wind up getting an eagle.

‘American Animals’ is in cinemas on Fri Sep 7 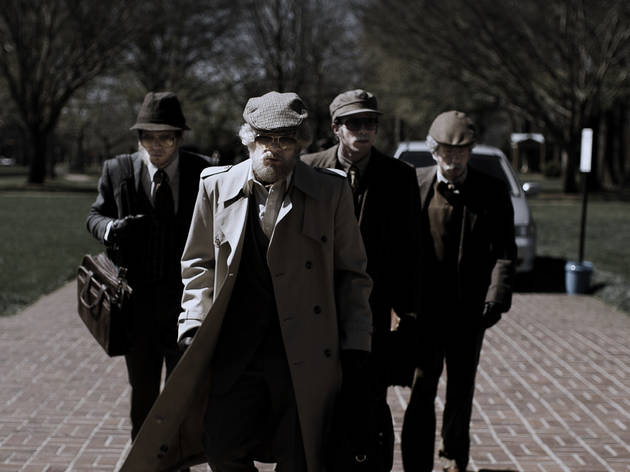