Viggo Mortensen is a man who likes his freedom. Always has. His first memory is of being alone in the woods at night. ‘I would literally climb out of the cradle while my parents slept, go and crawl off,’ he grins wonkily. ‘I did this a couple of times apparently. I’d cross the road and into someone’s house, wake them up banging pots and pans in the kitchen.’ Mortensen chuckles. ‘Disturbing, huh?’ Somewhere between his hotel room and the library he has parted company with his shoes and sinking back into a sofa stretches his rainbow-socked feet on the table.

Mortensen was 43 when he landed the part of Aragorn in ‘The Lord of the Rings’, ending a longish career as a character actor. Since then he’s mostly picked smallish independent films. ‘I like original stories,’ he shrugs. And he carries success with the hippy-ish air of a man who could take it or leave it.

When he’s not filming he’s writing poetry or making music or painting – and even has his own publishing house. A few years ago a journalist asked him where he lived. ‘Planet Earth, mostly,’ he answered. When I ask him the same question he’s more specific: ‘Madrid.’ What took him there? ‘Love,’ he says so quietly I have to ask him to repeat it.

He’s in London on a whistle-stop visit to champion his new film – one of those indies. It’s an Argentinian noir with shades of the Coen brothers, called ‘Everybody Has a Plan’: ‘It needs all the support it can get.’ Unless you’re familiar with Mortensen’s Wikipedia page, you probably won’t know that he spent part of his childhood in Argentina.

His family moved from New York when he was three – his Danish dad managed chicken farms and ranches. Mortensen and his two brothers grew up bilingual (‘at school kids would make fun of me, call me “Gringo” or “Yankee”’). He was 11 when his parents divorced and his American mum took the kids back to America. ‘I think quite a few actors have that itinerant background. You look at the world from different points of view.’

He’s always wanted to make a film in Argentina and met director Ana Piterbarg on a visit a few years ago – at the ground of San Lorenzo, the Buenos Aires football team he supports. The film gives him exactly the kind of meaty, challenging role he relishes. Two of them in fact – since he plays identical twins. One brother, Agustín, is a doctor having an identity crisis in Buenos Aires. The other, Pedro, is a rum sort who is wader-deep in a kidnap racket in the swampy backwater where they grew up.

Mortensen is an utterly convincing actor: terrifying as a Russian fixer in ‘Eastern Promises’; shockingly gaunt in ‘The Road’. People always call him a method actor, which winds him up. ‘I have no idea what method actor means,’ he says wearily. ‘Okay, I know what they’re driving at. That I’m obsessive preparing for roles.’

Stories of how far he’ll go getting into character are legendary. For the record, he never slept with his sword filming ‘LOTR’ – though he did keep his costume on during filming to give it a lived-in feel. ‘I try to research or make up for myself what happened in any character’s life,’ he explains. ‘From when he was born until the first page of the script. I fill in the blanks.’

He stops to knock back the last of drop of espresso. ‘And not to be underestimated in all this is showing up on time. And treat people like you’d like to be treated. Those are my methods. Show up on time and be nice.’

Read our review of 'Everybody Has a Plan' 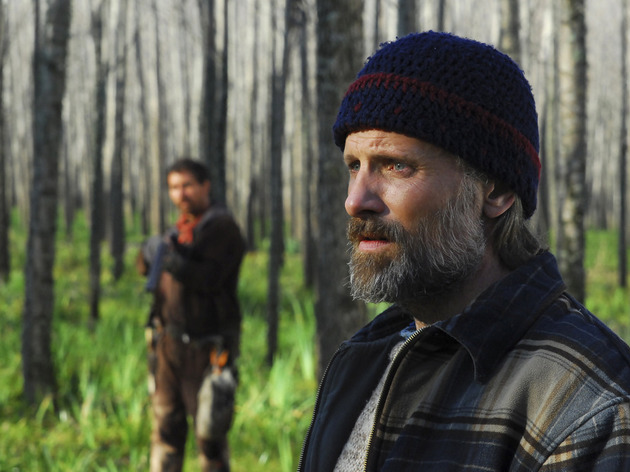 Hats off to Viggo Mortensen. He pulls off playing identical twins in this Argentinian thriller, which never quite lives up to his talents. A lesser actor would make the whole thing look gimmicky. Not Mortensen, who’s fierce, totally immersed and utterly convincing.