When will bars open in Montreal? No one knows, and nightlife is at risk

With the province holding back on announcing when bars will reopen in Montreal, business owners are stuck waiting

It's been nearly three months since the Quebec government asked that restaurants and bars across the province close their doors until further notice, but as the province gradually reopens itself—from museums and libraries to national parks and outdoor facilities—that left many wondering: When will bars reopen in Montreal?

For now, it's been a don't-call-us-we'll-call-you scenario with the Quebec government, and that's leaving many bar owners in Montreal with nothing but thoughts and prayers. When the provincial government released its plan for opening different sectors in phases, bars were placed under the to-be-determined banner of 'subsequent phases' at the bottom, while restaurants received placement in earlier phases.

As a result, there's no shortage of tension and outright anger from bar owners as they face a curious double standard: While restaurants have been permitted to sell beer and wine with their delivery and takeout, no bar is allowed to only sell alcohol even if they serve food themselves. Meanwhile, Quebec's SAQs can deliver to Montrealers homes, and that's been akin to rubbing salt in the wound. The most that some bars have been able to do is sell just-add-booze cocktail kits, but those could hardly cover the costs of rent, hydro and other bills.

#ACCATHOME Link in Bio • Our Cocktail Mixes will Soon be available on our webstore 🕺🏼 (pick-up only) ❤️🙏🏽 photo: @parfumdefemme

So, what's to blame? The current situation for bars comes from a mess of red tape that not even a machete could cut through: "The laws governing the restaurant and bar business have aged, collapsed, and are inoperable," the owner of the Saint-Henri bar Loïc Max Ruiz Lang wrote in an open letter to the government. "The permit application process and fee structure associated with it, the anti-competitiveness and inflexibility of the SAQ and the combative attitude the province has towards independent entrepreneurship needs to be reformed."

On May 12, the New Association of Bars of Quebec (NABQ) announced its creation in the face of the face of this troubling silence. "We are local businesses that give a soul to the different districts of Quebec cities," the release reads. The association is currently focused on ways to help and supplicate the government to address the issues of the right to sell alcohol, demanding a reopening protocol, negotiating commercial leases, and aid and financing. Its current members features dozens upon dozens of Montreal's greatest institutions, but despite its growing numbers, there's still no traction in the halls of Quebec City.

With no sign of support in sight, Montreal's renowned nightlife scene is at risk of being severely crippled, if not losing some of its institutions entirely. For bar owners like Sergio Da Silva of Turbo Haüs in the Latin Quarter, the only thing the business has at the moment is selling merchandise while the business' alcohol collects dust. “You have this stock, you have these things that you can move and make you money, but there’s all this red tape," says Da Silva. "Either you wants us to stay afloat, or you’re going to float us until things get better. Provincially, they’re not doing either of those things. They’re making things harder for bars and restaurants to stay open.”

We’re doing a second round of pre-orders for the t-shirts and Crew necks with the @chrisgoldsmith logo/design. Etransfer or PayPal booking@turbohaus.ca 25$ for the t-shirt or 55$ for the crew neck with local pick up. Add 5$ for delivery on the island of montreal 10$ off the island.

This is all especially precarious for Montreal bars like Turbo Haüs because of how, as a performance venue, it relies on a high amount of customers purchasing high amounts of drinks as they watch a show. The same goes for popular places like Casa Del Popolo, Bar Le Ritz PDB, L'Escogriffe, Les Foufounes Électriques, and many more like them. “In a space like mine, where you’re doing business on volume, I sell pints for $6, that’s my bread and butter,” Da Silva explains. "The shows are a huge thing. For a show, where you’re able to get 100 to 120 people in your bar drinking hard for 3 hours? That’s where places like mine make all our money... You have to be able to gather for a place like mine to exist.”

Even if concessions were made for alcohol to be sold for delivery or takeout through bars, the pitfalls the performance venues face could have dire effects on Montreal's cultural sector by extension. “I see places closing regardless of when restrictions are going to be lifted," says Da Silva. While he believes commercial rent freezes and grants or subsidies for cultural spaces could go a long way, initiatives like those could leave smaller businesses behind. “You have to be careful with who’s getting that money," he explains. "Techincally, many places are not venues, but bars that have shows. If they start putting in rules where only salle des spectacles can only get money—places like M Telus (or the Corona Theatre)—and then all smaller places get left in the dust."

As for what Montrealers can do? Write or call to your local and provincial government representatives, buy whatever merch and inventory you can from your favourite spots, and encourage other Montrealers to do the same.

- A new drive-in movie theatre pop-up is opening in Vaudreuil-Dorion, and admission is $10

- Marijuana could prevent catching COVID-19, according to one Canadian university's studies

- Where to buy face masks in Montreal

As for other reopenings in Montreal? 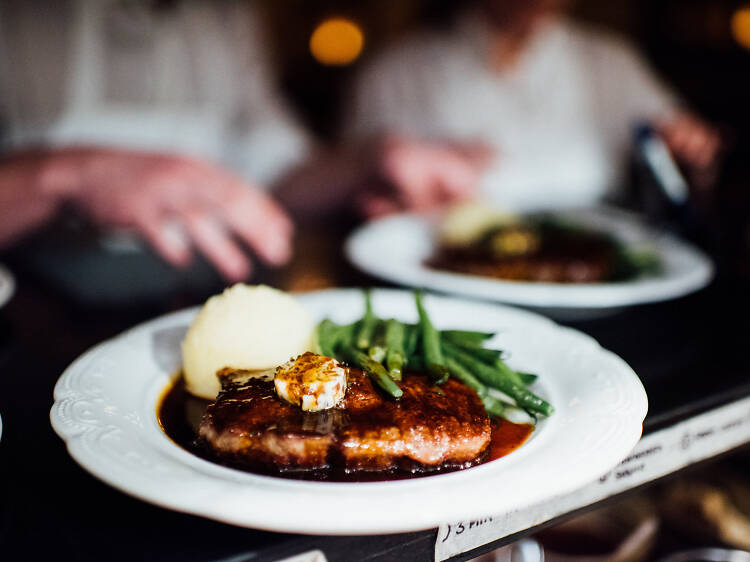 When will restaurants reopen in Montreal and what will dining out be like?

Tensions are rising in Montreal as restaurateurs, chefs and eager diners ask when restaurants will reopen in Montreal.