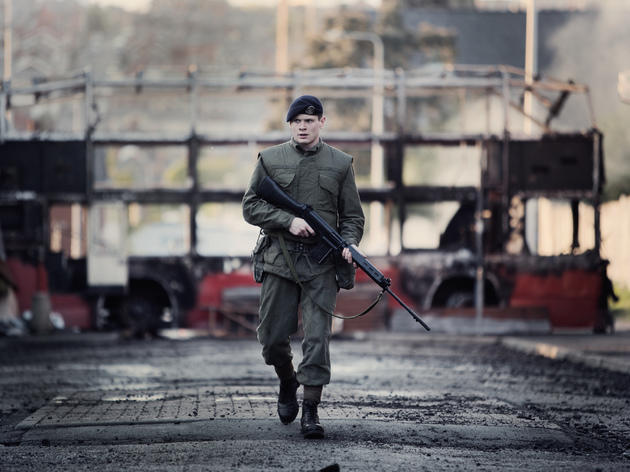 Belfast, 1971, and Gary (Jack O'Connell), a young private in the British army, is thrown in at the deep end of the Troubles; more than that, his hands are tied and there are bricks in his pocket. This quiet lad from Derbyshire has barely been in Belfast a day when he finds himself in the middle of a violent street riot sparked by a heavy-handed house search by police in a Catholic area. Matters turn worse when he becomes separated from his colleagues and has to flee down menacing alleys and up war-torn streets to escape with his life. As night falls, the stark reality of the situation begins to look more like something from a foggy, street-lamp-lit nightmare.

This is the first feature from French-born, British-based TV director Yann Demange, and it recalls Paul Greengrass's 'Bloody Sunday': same country, same period, same in-the-moment shaky camerawork and sense of escalating terror. But as darkness comes, ‘’71’ offers something more atmospheric and ambitious than mere documentary-style realism. Gary has the weight of the Troubles on his shoulders, and Gregory Burke’s script sets out to capture all the rifts and loyalties of 1971 Belfast: a thankless task, perhaps. So, the local Republican paramilitaries want Gary’s scalp, but there are splits among the Catholic extremists. Also in play is a small unit of morality-free, undercover Brits (their chief number played by a menacing Sean Harris) who think the life of a mere private may not be worth saving if it means exposing their own underhand methods.

Demange is a strong storyteller and masks the script’s tendency to nod to every opinion and social division by offering a masterclass in tension as soon as his dramatic bomb starts ticking. As Gary flees his Catholic pursuers, befriends a Protestant boy or takes refuge with a sympathetic Catholic father and his grown-up daughter, there’s always a sense of imminent danger.

He also piles on the atmosphere – too much so perhaps: some moments with mothers racing down the street pushing prams or cars on fire feel overly studied, too much like period photos come alive. All of which comes at the expense of characterisation: some of the players in ‘’71’, including Gary and especially a plum-voiced officer, feel thinly sketched. Still, you could almost bottle the sense of time and place, and the film’s mix of hard-nosed realist drama with more heightened genre elements – action, certainly; horror, even – means that it's always distinctive and has you in its grip from start to finish.