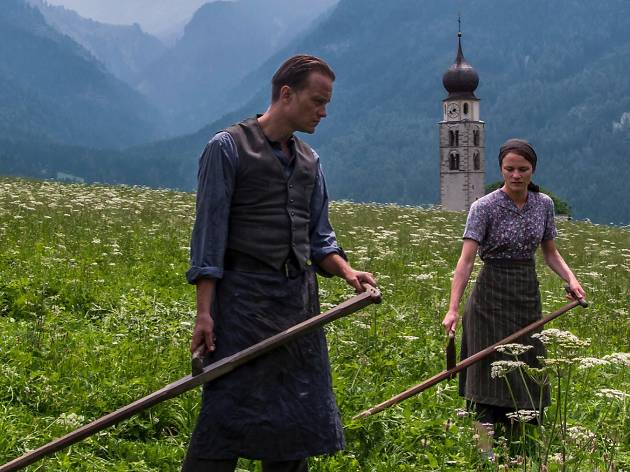 The famously press-shy director won’t be discussing it anytime soon, but Terrence Malick must have been stung by the shrugs that have greeted his recent films. As blasphemous as it sounds, his triptych of ruminations on love and relationships – ‘Knight of Cups’, ‘To the Wonder’ and ‘Song to Song’ – saw a style of filmmaking that had once been gloriously loose-limbed and elliptical starting to feel self-indulgent and unfocused. Had the maestro lost his magic touch?

Happily, the answer is a resounding no. The hard-hitting yet tender ‘A Hidden Life’ is his best work since ‘The Tree of Life’. It’s another languorous affair that leans heavily on the usual devices of disembodied voiceovers, golden landscapes (it’s his most beautiful-looking film since ‘The New World’) and Dreyer-like spirituality – and it’s sure to divide opinion – but the screws have been noticeably tightened on the storytelling and it makes a world of difference. There’s discipline and some raw power to go with all the usual visual beguilement. His philosophising feels much more urgent this time; the questions raised much more worthy of grappling with.

The film tackles the true-life story of Franz Jägerstätter (August Diehl), an Austrian conscientious objector whose refusal to swear an oath to Hitler and serve in the Wehrmacht made him a pariah first in his village, then with the Nazi authorities. We’re introduced to him as a farmer and a spiritual man living with his wife Franziska (Valerie Pachner) and young daughters in a chocolate-box mountain village. It’s 1939 and war is around the corner (the movie opens with Leni Riefenstahl footage of Hitler’s Nuremberg speech and the Nazi war machine gearing up), and the gentle Franz is called up for basic training. Instead of tilling the soil, he’s plunging bayonets into stuffed dummies in British uniforms.

But with Germany’s invasion of France over, farmers are soon discharged from the army and a troubled Franz returns to his village now entirely convinced that his nation (Austria having been annexed by Germany) is in the wrong. Back-dropped by the bucolic landscape and captured with roaming Steadicam shots, Franz and Franziska begin wrestling with the ramifications of opting out. What will it mean for them and their family? How long will it be before the Nazis come for him? But, even more importantly, what will it mean for him if he doesn’t protest? ‘If our leaders are evil,’ he asks, ‘what are we to do?’

It’s the central – and, you could say, fairly topical – poser of a movie that ushers the audience into Franz’s shoes. There are moments when he seems mulish, even selfish, as when he presents his supportive wife with what’s basically a fait accompli. But Diehl charts his complexities with a heavy-laden believability. The voiceover works here too, giving quiet voice to the doubts. And they come from all angles. If Franz objects to killing, surely he could serve as a medic instead? What about the other villagers who’ve been forced to serve? What about the memory of his father, who died in the trenches of World War I? Why not just hide out in the wood until it all blows over? The arguments are put to him in a series of vivid vignettes of rural life: the Nazi mayor who drunkenly berates him at a summer fete; the priest who contorts his own faith to persuade him to serve; the miller who offers snatched, worried words of support.

Diehl and Pachner are both terrific, mastering Malick’s improvisational style and bringing earthy authenticity to its playful family moments. It’s not a film full of familiar faces, though Matthias Schoenaerts pops up as a lawyer and the great Bruno Ganz appears as the head of a military tribunal with echoes of Pontius Pilate in his cross-examination of Frantz. The second half of the film works slightly less well, mainly because Malick overpowers things with a laboured Christ metaphor (is there any other kind?) and one too many Gethsemane moments. The power of Franz’s actions is in its quotidian bravery not its Messianic destiny. What are we to do? Take a stand. But, wonders this quiet but resoundingly emotional movie, how many of us would have the courage?