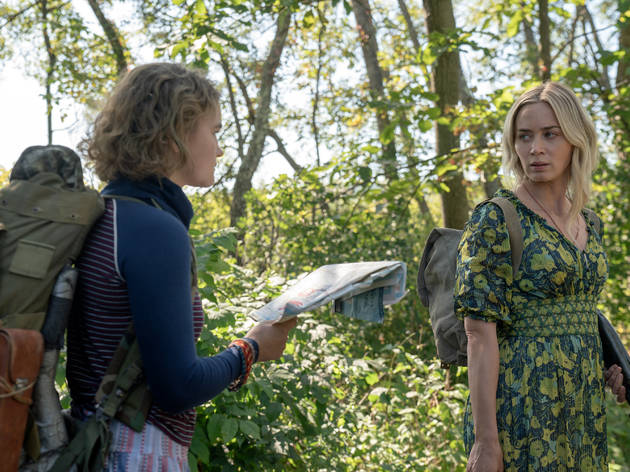 Its final moments aside, A Quiet Place didn’t immediately seem set up for a sequel. Yet with John Krasinski back on writing-directing duties, A Quiet Place Part II is everything a follow-up should be. While it can’t deliver the revelatory ‘wow’ factor of its predecessor, Part II successfully expands on its world and themes, while enriching its satisfyingly drawn characters. Anyone on the hunt for scares will be happy to hear that it delivers plenty of rapacious, sound-detecting, human-munching beasties too.

Krasinski begins by taking us back to the first day of the invasion, making the monsters’ origins concrete, giving himself a little screen time, and demonstrating he’s got real chops at larger-scale, pell-mell, long-take, hair-raising action.

We then rejoin Evelyn (Emily Blunt), daughter Regan (Millicent Simmonds), son Marcus (Noah Jupe) and her new baby after the events of the first film. Circumstances have seen them venture outside the farm that has been their sanctuary. Amid finely wrought details of the desolate landscape, and the introduction of another survivor (Cillian Murphy), their little family group winds up separating.

Dividing attention between distant characters can often dissipate the tension in scenarios like this, but Krasinski makes it work for A Quiet Place Part II. He comes into his own as a filmmaker here, building suspense with smart-judged cross cuts and investing us afresh in these imperiled characters.

While she gets several moments to shine, Blunt takes a secondary role in this one. Here, it’s all about the gifted Simmonds as the hearing-impaired Regan. Having stumbled upon the creatures’ Achilles’ heel in the first movie, Regan is anxious to find and help others, and the bravery and fortitude Simmonds projects in her wordless performance provide the film’s dramatic spine. Jupe fully engages our sympathies as well, Murphy is a compelling addition to the ensemble, and the vicious aliens once again carry real threat.

This sequel feels fresh, even as it continues Krasinski’s winning formula of sci-fi scares within a relatable family context. Whenever it seems to be heading into familiar genre territory, a curveball is delivered, as he expands the movie’s world without losing its gnawing sense of claustrophobia. During the prologue, there’s even a brief glimpse of a TV news tickertape highlighting the ‘Shanghai death toll’. How’s that for bit of shivery topicality?