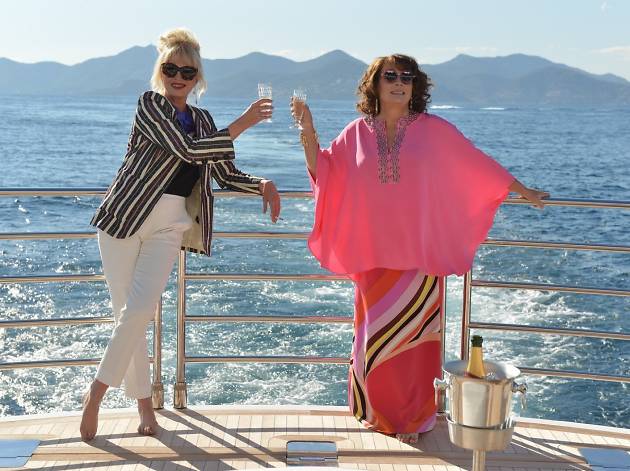 Joanna Lumley is the best thing about this funny but disappointingly not hilarious ‘Ab Fab’ comeback. So thank the fashion gods for the injections of Botox and foetus blood and the truckloads of Stoli-Bolli cocktails keeping Patsy permanently pickled: she’s so well preserved that in the event of a nuclear apocalypse she’d surely emerge out of the dust, fag still lit, backcombed beehive only slightly charred.

Elsewhere, the laugh rate is a bit slack, and the film looks dated compared to the early telly episodes from the ’90s. Seriously, watch them now on Netflix to see how Jennifer Saunders’s Edina was totally ahead of the game with her cosmic leggings (now required-wearing in yoga studios) and her omming like a #namaste wellness blogger.

‘Absolutely Fabulous: The Movie’ begins with a typical Edina and Patsy disaster. The champagne has run out: Edina’s ex-husband has stopped paying alimony so that he can fund his sex-change operation. Edina's money-making plan to publish a memoir of her life as a PR maven is rejected. Then, after getting a tip-off that Kate Moss has sacked her PR, Edina accidentally topples the supermodel into the Thames at a fashion party. Hated on social media for murdering Mossy, she flees to the Riviera with Patsy. (It would have been more fun to see them in the London drag club where Julia Sawalha’s Saffy ends up singing karaoke.)

There are all the usual ‘Ab Fab’ shenanigans: falling out of taxis, Patsy stashing Es in her hair. Lummers gets the best lines: not knowing the word for cash, Patsy calls it ‘hand-money’. The cameos are hit (hello, Jon Hamm) and miss (sorry, Stella McCartney and Brienne of Tarth). The big coup is getting Kate Moss to speak on camera – like Mona Lisa stepping out of her portrait. But even that is a bit of a let down. Instead of playing actual Kate Moss – she of the 20-a-day Croydon cackle and ‘basic bitch’ insults on EasyJet flights – Moss delivers a wooden cameo. Why not cast her as Patsy’s long-lost daughter? That'd be a sequel worth waiting for.