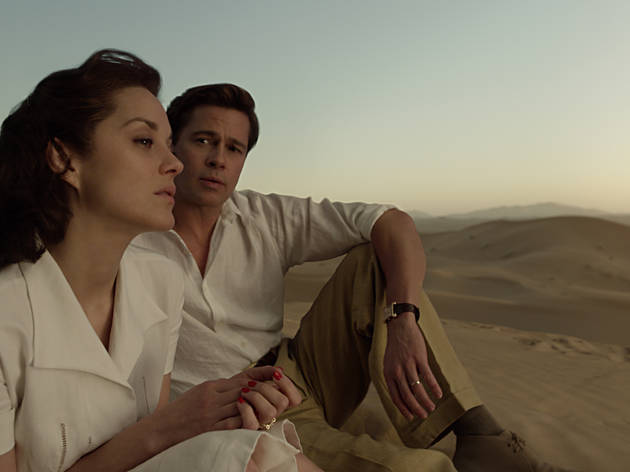 What’s your pleasure: a frothy spy romance or a grim World War II drama? How about both at once? ‘Allied’ sets itself up as a modern day answer to ‘Casablanca’: the early scenes are set in the Moroccan city under German occupation, and like the beloved Bogart ’n’ Bergman classic it combines a star-studded love story with a dark depiction of betrayal. But director Robert Zemeckis (‘Forrest Gump’) is no Michael Curtiz. Where ‘Casablanca’ glided seamlessly from swooning passion to stark reality, ‘Allied’ lumbers like an out-of-control tank, crushing any semblance of subtlety.

Luckily the film has plenty of charms, chiefly the sight of Brad Pitt filling out a flight suit and Marion Cotillard oozing glamour on his arm. Pitt is Max Vatan, a Canadian sent to Morocco to murder the German ambassador. Cotillard is Marianne Beausejour, a French agent tasked with easing his assimilation into Vichy high society. Their marriage is only pretence – at least until the job’s done, at which point Max invites Marianne to return to London and be his wife for real. Cue domestic bliss? Not quite.

Perhaps it’s a deliberate nod to those Hollywood oldies, most of them shot on LA backlots, but ‘Allied’ feels entirely fake. Even under German rule it’s hard to imagine a North African city as spotless as this. But nothing is as unconvincing as Pitt and Cotillard’s relationship. If you believe the old ‘Friends’ maxim that a lack of on-screen chemistry means definite backstage sparks, this pair’s entente may well have been more than cordiale.

And yet, bits of ‘Allied’ really do work. There’s a clawing tension to the later scenes, as their marital bliss starts to turn sour. Pitt’s anguish is convincing, and even if some of his actions are ludicrous – endangering an entire Resistance cell for his own peace of mind, for instance – we still feel for him. ‘Allied’ attempts to balance joy with heartbreak, and never fully manages either. But fans of old-school entertainment are unlikely to leave disappointed