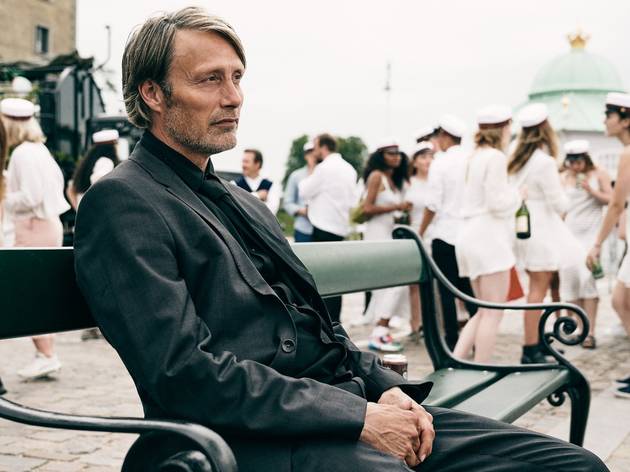 It’s a safe bet that many parents who shouldered the homeschooling burden during lockdown now have a turbo-boosted appreciation for the Herculean efforts of our teachers. It’s also possible that they may have appreciated a glass of wine or two more than usual midweek while taking on said task. But what if teachers leaned on libations while in school?

That’s the provocatively comic premise of Danish writer/director Thomas Vinterberg’s latest film Another Round. Once again he taps Hannibal star Mads Mikkelsen to lead his cast after the pair worked together so memorably on fraught Oscar-nominated drama The Hunt (2012). Mikkelsen plays despondent high school teacher Martin, who has fallen out of love with the gig and his wife. Stuck in a rut, he’s so uninspired by the day-to-day trials of prepping his students for their final exams that their parents turn up at school to complain.

His spark is reignited after attending a birthday night out with three mates teaching at the same school (Thomas Bo Larsen, Lars Ranthe and Magnus Millang). One points to a dubious report online that maintaining a cruise-control level of alcohol in your blood may boost productivity. The group embrace the idea wholeheartedly, with Martin leading the way. So much so he even raises the accomplishments of boozy historical figures like Ernest Hemingway and Winston Churchill in class, to the surprised delight of his suddenly more intrigued students.

There’s a louche ‘70s swagger to the film, as it follows this tightening band of brothers’ increasingly erratic behaviour non-judgementally. The tragicomic tracing of male fragility is fascinating. Even as things begin to spiral downwards, rapidly for one of the group, Vinterberg reserves any moral judgements. Embarrassing midlife crises or anarchic rebellion? Always an intriguing screen presence, Mikkelsen carries the slumping weight of world-weariness with aplomb while Vinterberg’s screenplay, co-written with regular collaborator Tobias Lindholm (The Hunt), crackles with fleet-footed banter. The film opens and closes with scenes of unbridled teen spirit, making it clear that we encourage youthful abandon while frowning on it in older folks. And that will leave you pondering this predicament for several rounds.

In UK cinemas Jul 2. Out now in Australia.