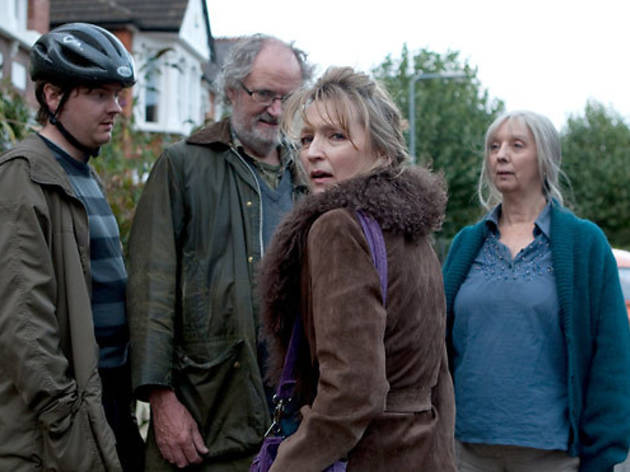 No punches pulled: The first image in Mike Leigh's superb drama is a severe close-up of the great Imelda Staunton as a depressive British housewife. Her dour, weight-of-the-world expression resonates throughout Another Year, even though this isn't her story. She's the emblematic entre into the devastating tale of happily married suburbanites Tom (Broadbent) and Gerri (Sheen), and their erratic acquaintance Mary (Manville), whose friendship slowly declines over the course of a year.

The film charts their division seasonally, beginning in spring and ending in winter. In lesser hands, this might seem schematic, but Leigh uses the structure to attune us to subtle, often surprising shifts in character---as mysterious in their own way as that illusory moment when summer becomes autumn. It's likely you'll initially gravitate toward the wedded couple, whose contented life (backyard barbecues, steady jobs, a home that glows with heart) is enviable. And for certain you'll recoil from their in-your-face gal pal, who inevitably ends up offending whomever she's around. (Manville gives a quintessential Mike Leigh performance, using every possible half-drunken facial tic to both repel and mesmerize.)

But these characters are more than what we see on the surface, and it's thanks to Leigh's rigorous yet generous eye that we never just gawk at the drama. Our impressions become fascinatingly muddled: Tom and Gerri's happiness seems suspect the more we learn about them (they appear to passive-aggressively leech sadness from their life). And as Mary tries with increasing effort to maintain the friendship---especially after a disastrous flirtation with her friends' lawyer son (Maltman)---her desperation becomes uncomfortably recognizable. Our sympathies and frustrations no longer gravitate toward one or the other, but to all. We know them, and though we might like to think otherwise, we've been them.