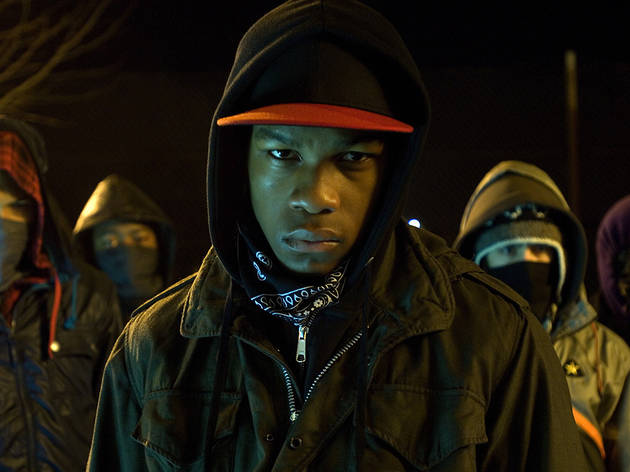 It’s always worrying when an artist you admire in one field decides to branch out into another. Bob Dylan’s painting career, Russell Crowe’s band 30 Odd Foot of Grunts, the novels of William Shatner – are all destined for the trash pile of cultural history. But on the strength of his feature debut, ‘Attack the Block’, it’s already clear that, in a decade’s time, no one will even remember that Joe Cornish used to be a comedian.

At first glance, it looks as though Cornish has set the bar low for his first movie. A storyline inspired by the ’80s genre movies he grew up with (and lovingly parodied on ‘The Adam and Joe Show’), tied to a currently popular film fad – the London yoof movie – and set literally on his doorstep, ‘Attack the Block’ could easily have been a lazy, smug sci-fi parody: ‘Morons from Outer Space’ goes gangsta.

But, like the aliens that rampage through a Brixton tower block, this is an entirely unexpected beast. An unrecognisably well-spoken Jodie Whittaker plays Sam, the jobbing nurse whose decision to move into a south London estate backfires when she’s first mugged by teen thugs, then chased by marauding monsters. But Whittaker, and comic relief Nick Frost as weed dealer Ron, are merely the audience-friendly commercial face of ‘Attack the Block’. The real stars are those thugs, led by taciturn wannabe player Moses (John Boyega, stunning), whose decision to tool up and defend their turf kicks the plot into high gear.

And this is an astonishingly fast-moving film. Cornish doesn’t do eerie build-ups or character-establishing dialogue scenes: it’s pedal to the metal from the word go, and we learn on the hoof about Moses’s family issues, Ron’s business troubles and the complex relationships within the gang. This can make the opening scenes confusing: there are a lot of characters to keep up with. But it pays off in pure adrenaline: we’re never given a second to settle, and the result is exhilarating. Gradually characters emerge, and it’s here that Cornish’s skill as writer and director becomes evident. These kids start out as caricatures – the moody leader, the speccy geek, the mouth – but the respect shown to them is hugely refreshing, and their progressions are heartfelt and wholly believable: Shane Meadows would be proud.

All of which elevates ‘Attack the Block’ from fun creature-feature throwback to this year’s unmissable British movie, and Cornish from just another geek-turned-filmmaker to a major talent: if he can strike a similar balance between sympathy, insight and crowd-pleasing thrills in future projects, his status is assured.

‘Attack the Block’ isn’t perfect – the aliens are a tad unremarkable and the final blowout never hits the frenzied peak it might have – but it’s hard to imagine British audiences having more fun in a cinema this year. Now, who’s going to fund the Adam Buxton movie?