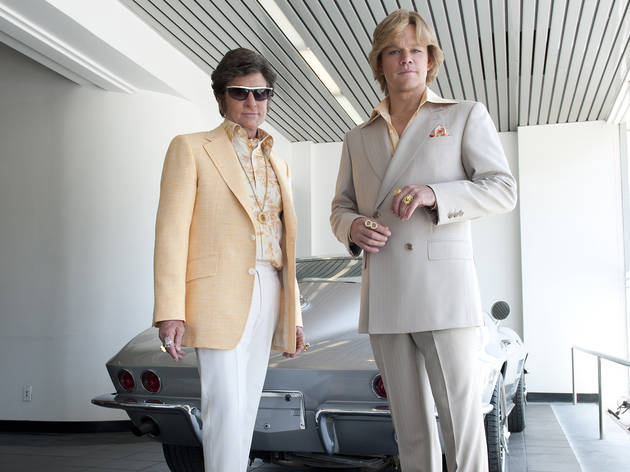 Christmas will be green with envy if it ever gets a peek at the camp pleasures of Steven Soderbergh’s ‘Behind the Candelabra’. Anyone the less leathery side of 50 might struggle to place Liberace, the flamboyant – as the tabloids surely tagged him – performer who wowed crowds in Las Vegas with his way-over-the-top but essentially wholesome cabaret show. Liberace was gay, but he didn’t let on, instead creating a dare-them-to-say-something persona of floor-length fur coats, lashings of rhinestones and very public love for his mother.

This massively pleasurable and understanding biopic covers the decade before Liberace’s death in 1987 at the age of 67 and tells of his complicated relationship with his secret lover, the much younger Scott Thorson (Matt Damon), on whose book it’s based. There are several scenes of Liberace, played with real care and compassion by Michael Douglas, performing live, and the film ends with a fantasy high-wire sequence, but essentially this is a domestic drama. If that sounds drab, think again. Liberace might tell his new boyfriend Scott that he likes to cook, but there’s not an oven in sight. ‘I call this “palatial kitsch”,’ coos Liberace – Lee to his friends – to Scott as he gives him a tour of his house.

‘Lee thinks he’s King Ludwig II,’ jokes a mutual friend to Scott, played by Damon as a slightly green but decent young man still finding his way with his sexuality. Scott might be naive, but he’s no fool and nor is he overly impressed by Liberace’s wealth. He’s wary of the age gap but he sees how much pleasure he gives Liberace, and they enter into a relationship in which he’s part lover, part employee, part son. Matters turn claustrophobic and a little creepy when they both have plastic surgery and never look – or move – the same again. Soderbergh gives us comic-macabre scenes of surgical knives cutting skin and hammers breaking noses – and Rob Lowe is hilarious as a plastic surgeon whose own face is as rigid as a cliff face.

Soderbergh is happy for us to gawp and laugh at Liberace’s pampered lifestyle, excessive furnishings and penchant for surgery. And why not? The man’s life was a gilded bubble. But Richard LaGravenese’s script, although conventional as it hops through the years, also strives to understand the progression of a relationship going sour and to find some meaning in it – in the context of both Liberace’s temperament and the sexual politics and social conventions of the time. The film doesn’t apologise for his less endearing habits – Liberace becomes a suffocating, domineering partner who confuses love with employment – but it’s also sympathetic to the unhappy contradiction of a man being a ‘matinee idol’, as he calls himself, and being gay. The real success of the tone that Soderbergh achieves here is that we’re able to laugh at the extremes of Liberace’s life without ignoring the sadder, less obvious elements of his personality. It’s both a romp and uncomfortably real.