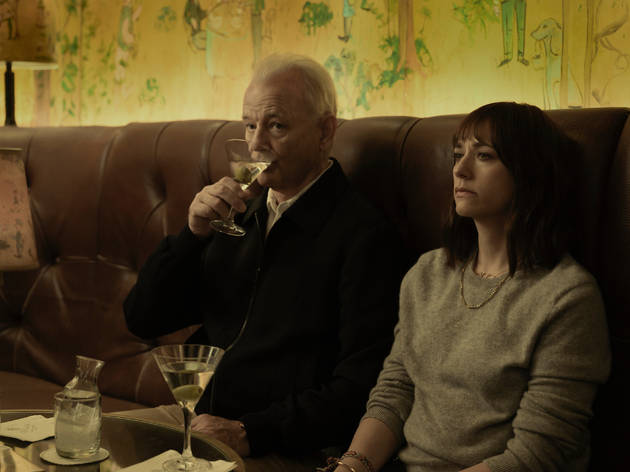 Hitch a ride with Sofia Coppola’s footloose comedy-drama about dads, daughters and divorce

It’s not quite up there with Lost in Translation but Sofia Coppola’s latest rumination on ennui, drifting relationships and the rarified discontent of seemingly comfortable lives may be exactly the existential crisis you need right now. It’s one of those films that seems to creep up on you: one minute, you’re revelling in its chi-chi New York locations and the sight of an on-form Bill Murray and Rashida Jones reinventing the buddy comedy; the next, you find yourself welling up as it zooms in on the painful undercurrents of father-daughter dynamics.

This story of flawed fathers and disappointed daughters is partly inspired by Coppola’s own dad, though it’s hard to imagine incorrigible playboy Felix (Murray) staying in one place long enough to do anything as concrete as making a movie. To the lasting resentment of his daughter Laura (Jones), a blocked writer and mum on the cusp of turning 40, he’s already bailed out on her mother – and his womanising days seem far from over. But who better to help her find out if there’s something going on between her entrepreneur husband Dean (Marlon Wayans) and his attractive new colleague? This poacher-turned-gamekeeper even brings his own transport (a vintage Alfa Romeo) and a pair of binoculars.

The pair’s sleuthing takes in some of Manhattan’s most boho corners – the olde-worlde Bemelmans Bar is On the Rocks’ answer to Lost in Translation’s Park Hyatt Tokyo – before embarking on a fairly pointless diversion to Mexico. But the real fun of the film – and its beating heart – comes in watching the pair hang out, relitigating old wounds and jousting over monogamy, trust and dad’s very pre-#MeToo outlook (‘I don’t know why women get plastic surgery,’ muses Felix. ‘Because of men like you,’ comes the acid reply).

Murray and Jones know when to play for laughs and when to mine a little deeper, and Coppola does too – On the Rocks is full of observational moments that do both. A rogue Roomba provides a deadpan interlude, appearing in Laura’s office and repeatedly butting the wall in a way that’s more than a bit analogous with her creatively stymied state of mind. It reminded me of watching Stephen Dorff’s disengaged movie star going round in circles in his Ferrari in Somewhere.

Jenny Slate has a ton of fun as a divorced friend whose anarchic love life acts as a cautionary tale for the restless Laura. But On the Rocks is the Murray-Jones show: one provides a highly relatable snapshot of a dynamic woman at the end of her tether; the other is all tether. Riding along with them as they cross the Big Apple looking for her husband and a little common ground is a journey well worth taking.

In US and UK cinemas on Fri Oct 2, and on Apple TV+ worldwide on Oct 23