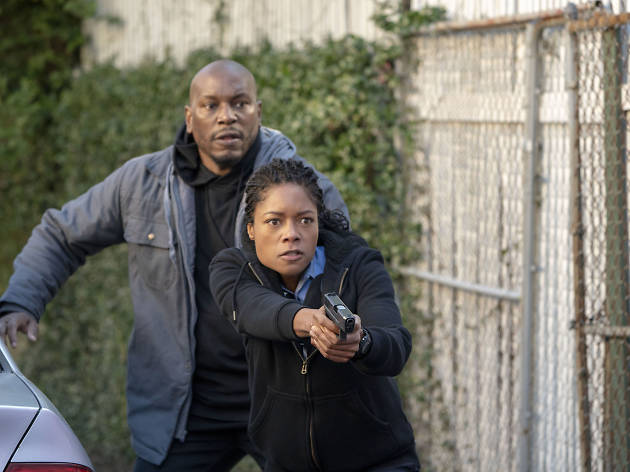 Despite the best efforts of Naomie Harris, this generic cop thriller should be handing over its gun and its badge.

The credits at the end of ‘Black and Blue’ list not only ‘Stairwell Bad Guys’ but ‘Apartment Bad Guys,’ which is about as deep as characters get in this slice of cop piffle. It is a film where someone asks ‘You all right?’ while their friend, having just been shot, leaks blood. A film that would be over very quickly were anyone to say or do anything remotely sensible.

It is absurd that this is the hugely talented Naomie Harris’s first leading role – and it’s a shame. She is great as a principled rookie who joins the force in New Orleans only to be immediately faced with institutionalised racism and endemic corruption. Thanks to preposterous plot machinations, she witnesses her cop colleagues murdering a couple of local hoods and, with the footage captured on her body cam, she’s in hot, murky water. A right old pickle.

The potentially interesting material is suffocated by a B-movie story and a C-grade script. Plot spills out of these people’s mouths. With less substance than a ‘Grand Theft Auto’ mission, there is no weight, no meat, but, certainly, where the dialogue’s concerned, a lot of cheese. It is the quattro formaggi of naughty cop films. Nevertheless, there is dumb fun to be had – it is propulsive enough, and you root for Harris and her sidekick, Tyrese Gibson, who do what they can to survive their trip to Trope City. There is even one funny line. The film could maybe have done with more than one.

Director:
Deon Taylor
Screenwriter:
Peter A Dowling
Cast:
Naomie Harris
Tyrese Gibson
Mike Colter
You may also like
Popular movies
We know this city. Do you?