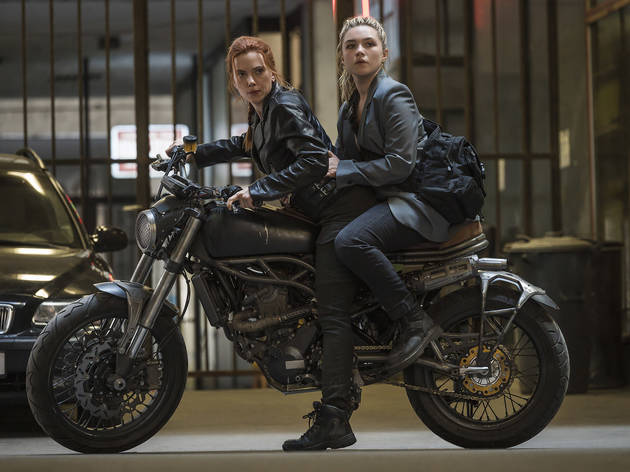 A superhero steals the show in Black Widow – and it’s not Black Widow. At least, it’s not that Black Widow (there are a lot of ‘Black Widows’ in the Marvelverse’s 24th movie). After waiting forever for Scarlett Johansson’s Avenger to get her own solo spin-off movie without Tony, Steve and co, along comes Florence Pugh to steal it out from under her. She plays Natasha Romanoff’s (Johansson) mickey-taking baby sis and fellow member of the Black Widow programme, Yelena Belova, and she nails it with the spark of someone who’s been kicking around the Marvelverse since day one.

And there is a lot of kicking to do in a satisfying mix of muscle and emotion that, for at least half of its runtime, calls to mind the Jason Bourne franchise. The fight scenes have a bone-shaking vigour. One fierce early clash between Romanoff and Belova in a distinctly unsafe safe house (file the sisters’ relationship under ‘it’s complicated’) offer Johansson’s most wince-worthy domestic since Marriage Story. Black Widow leans into its espionage-movie influences with nods to spycraft (props to whoever came up with ‘Fanny Longbottom’ for Romanoff’s fake passport) and starring roles for spy-movie locations like Budapest, Morocco and Norway. And when Romanoff sits down to chug a beer and quote along to Moonraker, Black Widow may even be acknowledging a debt there, too, in a villain with shades of Hugo Drax.

While it’s set in the Avengers-splitting aftermath of Captain America: Civil War, the prelude takes us back to Ohio in 1995, where a blue-haired teen Natasha Romanoff, settled and happy, is suddenly spirited away with her younger sis (Violet McGraw), by her mum (Rachel Weisz) and scientist dad (David Harbour). It turns out that this family is nuclear only in the sense that they’re working for people with a lot of nukes: they’re a Soviet sleeper cell after top-secret US research and about as apple-pie American as a Stoli hangover. Dad is actually a beefy Soviet superhero called Red Guardian.

The opening credits that follow set up the story in vivid docudrama style: Natasha and her sister are left in the trust of an evil Soviet general, Dreykov (Ray Winston, wiv a wery variable Wussian ack-cent), in a brutal training academy for a cadre of female assassins called the Red Room. Romanoff is on the hunt for revenge, with her sister along to help and to take the piss out of her fighting poses. ‘I doubt that the god from space has to take an Ibuprofen after every fight,’ she say, Thor-shaming her pill-chugging sibling. To complicate matters, Dreykov has an enforcer in the relentless, skull-faced machine called Taskmaster (think a T-800 and Skeletor had a family).

After the intricate plotting of the last few Marvelverse movies, the lack of Infinity Stones in the movie’s pockets feels energising here. And while Black Widow is not entirely MacGuffin-free – there’s a mind-control device to disarm and Taskmaster to unmask – director Cate Shortland (Somersault, Lore) gets plenty of space to dig into Romanoff’s struggles with her identity and surface old guilt over a job gone horribly wrong. There are plenty of laughs to leaven the heavier themes, too. The speed with which the four pretend-family members regress to squabbling when they’re eventually reunited is one of many low-key joys, while Harbour has a blast as the pompous Red Guardian trying to squeeze back into his super suit and talking up an imaginary rivalry with Captain America.

A few flaws keep Black Widow a rung or two below top-tier Marvel, including a sluggish final act, some generic villainy and yet another overlong runtime – seriously people, two hours is fine – but if you’re after a big, expertly-crafted, self-aware chunk of blockbuster entertainment to watch on the big screen, Marvel, as usual, has your back. See it at the cinema, though, because one thing’s for sure: your sofa has seen more than enough of it.