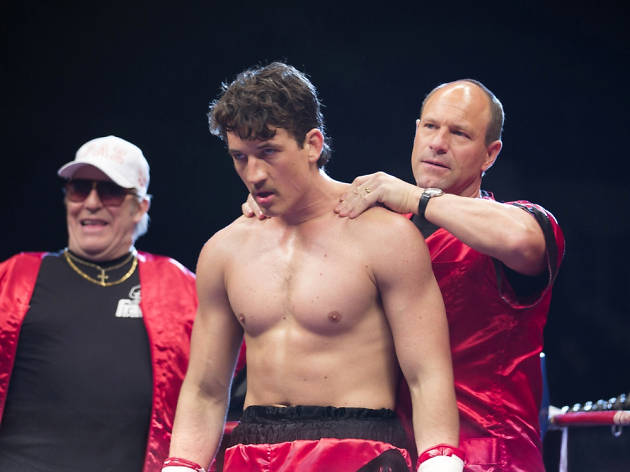 A troubled boxer. A committed coach. A horrifying accident. A whole lot of tears and yelling. Yes, if your problem with ‘Million Dollar Baby’ was the lead character’s lack of a penis, welcome to ‘Bleed For This’, in which Miles Teller takes the well-trodden shortcut to Oscar glory by playing a battered pugilist with a heart of gold. This time, the story’s (mostly) true: Vincent Pazienza, aka Vinny Paz, aka the PazManian Devil, was an Italian-American fighter from Rhode Island who built his reputation with a string of wins under the direction of Mike Tyson’s old coach Kevin Rooney. A spinal injury put Pazienza out of action, seemingly for life. But this kid had heart…

‘Bleed For This’ has awards-bait scrawled all over it, but it’s hard to imagine it scooping any major gongs: like Vinny himself, it’s more feisty scrapper than serious heavyweight champ. Teller is terrific as Pazienza before the accident, all wiseguy mouth and muscular confidence – you get the sense the character and the actor aren’t exactly worlds apart. He’s less convincing as the older, wiser Paz of the film’s second half, but that’s as much a scripting problem: we just never really get a sense of this guy’s pain. The supporting cast are solid: Ciaran Hinds is an odd choice to play Vinny’s long-suffering Pop, but Aaron Eckhart is superb as Rooney, and his gleaming Art Garfunkel bonce steals every scene it pops up in.

Overall, 'Bleed For This' is difficult to dislike: the story may be hokey but it’s real, and so is the sentiment behind it. The direction by ‘Boiler Room’ veteran Ben Younger is solid, and the story is undeniably compelling. But it just never quite scrapes the heights of bigger, better boxing movies, from ‘Raging Bull’ to ‘Creed’ – the ringside scenes never knock you back, and the script verges on complacency. ‘Bleed For This’ works up a good sweat, but it never quite lands that killer punch.