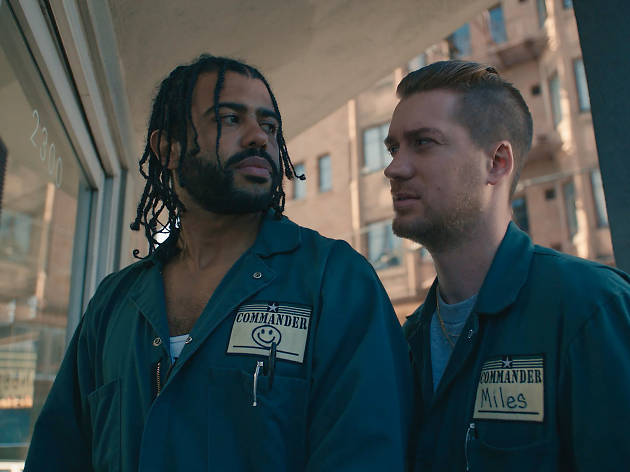 A mercurial and explosive film, ‘Blindspotting’ nimbly parses conflicts about race, rent, incarceration and gentrification. The film is set in bustling and bristling Oakland – a landscape that churns with spoken word as well as tensions between long-time residents and gentrifying tech hipsters. The protagonists are played by its eloquent screenwriters, Daveed Diggs (of ‘Hamilton’ and ‘Black-ish’ fame) and Rafael Casal. They portray Oakland natives who work at a removals company.

Miles (Casal) is loyal to his friends and territorial to a fault; despite the moderating influence of his wife (played with memorable conviction by Jasmine Cephas Jones, Diggs’s ‘Hamilton’ co-star), Miles’s hair-trigger fury is often ignited by instances of hipster encroachment. Soft-spoken parolee Collin (Diggs) dodges violence and tries to mitigate the chaotic leanings of his best friend. But early in the film, Collin witnesses a terrifying incident that threatens his post-incarceration plans.

‘Blindspotting’ is a remarkably suspenseful film. Scenes swerve from hilarity to high tension, but the suspense is in service to a conscientious goal. Gun-filled sequences – despite set-ups worthy of Scorsese, Park Chan-wook or Antoine Fuqua – don’t often culminate in the expected bloodshed.

It’s not perfect, and some of its mundane conversational episodes fall flat. But for the most part, the dialogue remains deft and the plot twists invigorating. This film engenders empathy for characters Hollywood often neglects, and its nuanced characterisations hint at the challenges of painting discrimination in primary colours.

‘Blindspotting’ also weaves poetry into its characters’ everyday lives, with striking results. Fans of ‘Hamilton’ will find much to admire here. The protagonists use lyrical speech to negotiate challenging circumstances; their verse-infused scenes call to mind the surreal musical interludes that enlivened ‘The Singing Detective’ and ‘Dancer in the Dark’.

The rich hues of cinematographer Robby Baumgartner and a compelling soundtrack from Michael Yezerski bolster the fine work of director Carlos López Estrada and a strong ensemble cast. ‘Blindspotting’ boasts an embarrassment of visual, narrative and poetic riches.