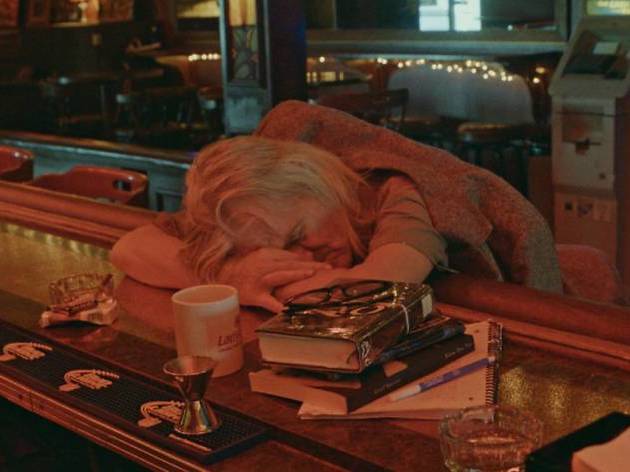 Michael describes himself as ‘a guy who used to do stuff, but doesn’t do stuff any more because he’s in a bar’. He shaves in the loos. He even sleeps on the sofas. The other regulars are his family. Today the Roaring ’20s is closing for good – and he doesn’t know what he’ll do without it.

Bloody Nose, Empty Pockets is a document of that final piss-up: a diverse bunch of Michael-like eccentrics getting plastered over the course of one very long and very hilarious night. Things quickly get messy. Conversations go in on the weighty questions du jour – the time is around the 2016 US election – but wind up going off on tangents like: ‘Senses – now that’s something I appreciate.’ There are a lot of heartfelt deep and meaningfuls and even more hiccupping. Boobs are flashed. Arguments sizzle. Two of the barflies take an acid trip. And the jukebox? Well, it’s never not on.

It all feels brilliantly chaotic and immersive and so compellingly real. Except it’s not. This so-called ‘documentary’ was shot in New Orleans, not Las Vegas. Most of the cast had never met before filming. Michael, the supposedly out-of-work central figure, is a professional actor. And yes, they’re all tearing up over a bar that isn’t actually their local and isn’t actually closing.

Directors Bill Ross IV and Turner Ross have had you, basically. The brothers, known for their documentaries, auditioned hundreds of barflies from around the Big Easy, chucked them in a ‘bar that looked right’, and let them get as mashed as they liked over the course of two 18-hour filming sessions. So, correct, it’s not a documentary per se, and that might explain why it got so many talking at Sundance this year. Some critics have argued that there’s something deceptive about such boundary-blurring. But I’d point them in the direction of the film’s opening quote: ‘We hold these truths to be self-evident.’ Hardly trying to hush it up, are they?

The most significant truth is, you do end up sympathising with John, the Vietnam vet who feels totally forgotten by society. Michael is so present in your life you’d definitely miss him if he were gone. The long-suffering bartenders, Shay and Marc, feel like good friends. These are all real people, and as in all the best docs, you properly get to know them.

Bloody Nose, Empty Pockets does an impeccable job of capturing how haunts like the ’20s can act as both a refuge and a trap for those who frequent them. Most of the regs aren’t there out of choice. They are simply lost; disillusioned by their lot in life. And as they leave, one by one, in the early hours of the next morning, you almost want to hold out an arm and join them as they tumble home.

Streaming in the UK on Curzon Home Cinema Dec 24. In cinemas Jan 1.