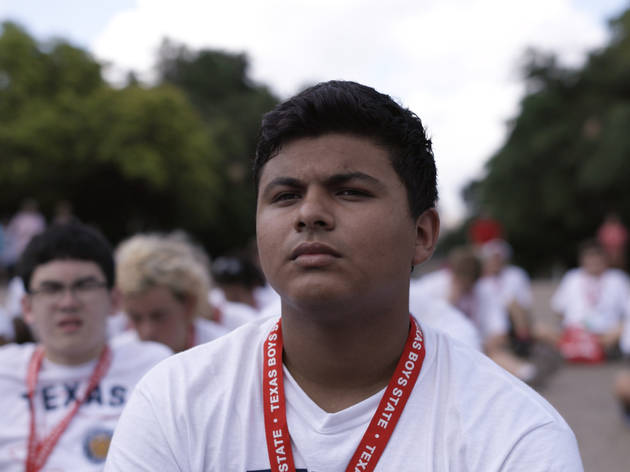 To get a sense of a man’s values, you could normally do a lot worse than have a fly-on-the-wall camera crew follow him around for seven days recording his every waking moment. Not so much in this enthralling, occasionally inspiring but often rather dispiriting doc charting The American Legion’s Boys State programme. It’s a week-long gathering in which a thousand 17-year-olds build a two-party system from scratch and elect a governor at the end of it. And guess what? The kids turn out to be precociously adept at compromising their values in the pursuit of power. It’s no surprise to learn that Dick Cheney, Bill Clinton and Russ Limbaugh all passed through this jocular political bootcamp.

Opening with grizzled veterans flinging questions like ‘what does the flag mean to you?’ at young hopefuls, filmmakers Amanda McBaine and Jesse Moss follow the successful applicants to Austin’s University of Texas campus and dispassionately observe as they get stuck straight into campaigning, alliance forging and building tentative policy platforms for two parties: Nationalists and Federalists. A handful of telegenic young wannabes quickly rise to the surface and offer a narrative path through this noisy and, to those unfamiliar with US politics, occasionally baffling forum. One of them, charismatic but intellectually underpowered jock Robert, might have swaggered straight off the set of Dazed and Confused. ‘It was somewhat of a problem,’ he notes of the American Civil War.

Most notable is how so many of these young men – and it is just men, and overwhelmingly white ones from conservative Texan backgrounds – come equipped with all the dark arts of seasoned politicians. ‘You have to use personal attacks and divisive issues to differentiate yourself,’ says self-professed ‘political junkie’ and Reagan devotee Ben, in between smearing one opponent and overseeing a social-media assault on another. He wants to join the CIA and you leave the film very much hoping he’s not successful.

The MAGA Youth vibe is cut through by a couple of standout characters: soft-spoken Mexican-American Steven, a Bernie bro who finds his voice, stirringly, as the week goes on; and René, one of the few Black participants, a fiercely erudite, passionate orator who is subject to regular impeachment attempts from his own side. Is this the result of his lack of a common touch or just plain racism? You’re left to draw your own conclusions.

The meagreness of the ideas bandied about is striking, and the sight of a thousand frat boys chewing over women’s reproductive rights is not going to be for everyone, but there are some genuinely inspiring moments among the hubbub and discord. The co-filmmakers smartly flip from their objective fly-on-the-wall approach and capture them with a degree of cinematic flair. When Steven nervously takes the podium to deliver a key speech, a focus pull switches from an ominous-looking mic to an expectant audience, capturing the gap he needs to span in one simple visual device. He nails it, providing a genuine stand-up-and-cheer moment.

But Boys State is not a documentary full of visual trickery or editorial chicanery. Its intermittent talking-head interviews with these key subjects are relaxed affairs rather than inquisitions. Reading between the lines, there’s a distinct sense that the people it would most like to grill aren’t on hand: the older generations who taught these kids that cynicism is the only path to power in politics. It’s a bleakly familiar message for our times.