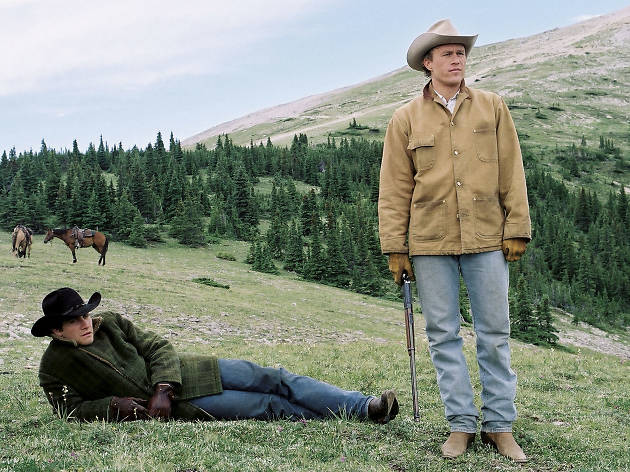 But there’s little in this film to excite either John Wayne fans or devotees of Warhol’s ‘Lonesome Cowboys’. Instead, the film’s themes of forbidden love, lost opportunity, marital deception and romantic honesty are quite accessible, mainstream even. The revolution is all off-screen: what ultimately makes ‘Brokeback Mountain’ a radical project is that it’s set to become the first bona fide, well-made and commercially successful gay weepie to emerge from Hollywood.

Jack and Ennis meet on a Wyoming mountainside one summer when both are employed to watch over the flock of a local farm baron (Randy Quaid). Lee indulges wide shots of flowing rivers, travelling sheep, wispy clouds and mountain vistas to canonise the pair’s experience on Brokeback Mountain. He threatens to over-sweeten us with the shallow beauty of a Marlboro commercial or Wrangler advert until, one night on the mountain, a drunken Ennis spits on his hand, turns Jack over and lights the fuse on an on-off love affair that will stretch painfully over two decades but never escape the macho strictures of the rural worlds to which they belong. Both marry; both have kids; both meet occasionally over 20 years for the odd tryst disguised as a fishing trip. For Jack and Ennis, Brokeback Mountain is more than a place; it’s a symbol of what could have been, a state of mind, an unattainable nirvana.

‘Brokeback got us good,’ sighs Jack to Ennis as their strained friendship floats through the years, forever secret, barely defined, hardly spoken. Always taking his cue from Proulx’s original story (a marvel of epic economy), Lee and his screenwriters Larry McMurty (‘The Last Picture Show’) and Diana Ossana present just enough of the pair’s married, post-Brokeback lives to remind us of the conservative and traditional nature of their domestic lives.

But what makes ‘Brokeback Mountain’ more interesting than a well-meaning time capsule of period values are the subtle differences in character that Lee carves between Jack and Ennis. Jack is more exuberant, more romantic, a dreamer who rides the rodeo and hatches impossible plans for him and Ennis to live together. Ennis is a puritan, unadventurous and afraid of himself; he takes solace in violence, holds back emotionally and creates excuses for the stagnation that defines his life. The film is Ennis’s tragedy; it becomes painfully obvious that he left his soul on Brokeback Mountain. It’s a tough act to witness and one that Heath Ledger handles superbly, delivering an increasingly sad, mumbling and desperate performance that smacks of loneliness and alienation. And all because the boy loves the boy but barely knows what such love means, let alone possesses the tools with which to act on it.

What we have here is acutely calibrated storytelling. Nothing is wasted. The pacing is calm, the mood sombre, and the adaptation is both respectful and imaginative. Lee retains the taut ease of Proulx’s prose, allowing him to cover a long period of time (about 20 years) without lessening the tragedy at the heart of the tale or offering episodic biographies. Very little is added to Proulx’s story; the film’s screenwriters take smart inspiration from a line here or a comment there, spinning them into well-placed new scenes.

‘Brokeback Mountain’ deserves all the awards and acclaim that it’s bound to gather in the next couple of months. It’s painful stuff, moving and intelligent. Lee has taken a story of gay love and placed it where it should be – in the mainstream. He’s delivered a beautifully crafted film to boot.