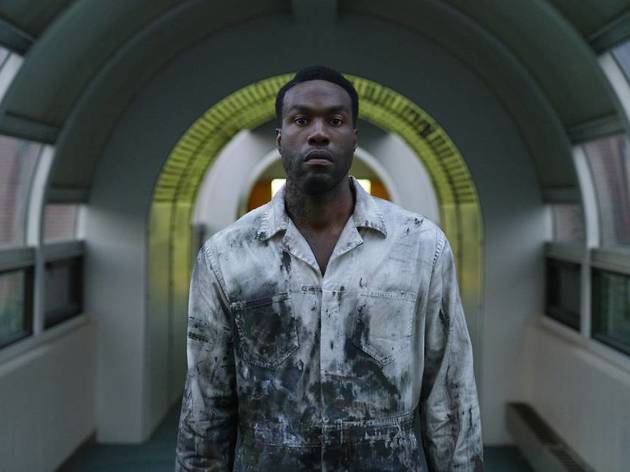 No list of cinema’s greatest boogeymen is complete without Daniel Robitaille, AKA Candyman. First unleashed in 1992, Tony Todd’s hook-wielding monster made victims of any resident in Chicago’s Cabrini-Green project foolish enough to say his name five times, bringing a combustible mix of frights, and social and racial commentary to three films. Nia DaCosta’s self-billed ‘spiritual sequel’ resurrects that vengeful spirit – and it’s just as terrifying and timely as ever.

This time, the story is focused on Anthony McCoy (Yahya Abdul-Mateen II). He’s a painter living in a now-gentrified Cabrini-Green with his girlfriend Brianna (Teyonah Parris), an art gallery director. Searching for inspiration on his next project he decides to investigate the Candyman phenomenon, but soon finds that he’s connected to the urban legend in more ways than one.

There are multiple moments within that set-up where Candyman earns its stripes, with welcome moments of levity (most notably from Nathan Stewart-Jarrett as Troy, Brianna’s brother) sprinkled in among the scares. But as is befitting of any project that bears Jordan Peele’s name (the Get Out director co-writes and produces here), there is a lot to unpack.

The idea of inherited trauma is expanded on in fresh, exciting ways, while the conflict caused by gentrification is foregrounded far more than in the original – one of many benefits to having a Black director calling the shots. Indeed, it’s because of this that one of the film’s most pointed and important lines – ‘[White people] love what we make, but they don’t love us’ – not only exists, but resonates.

It helps that Candyman is exquisitely shot. Right from the first frame, DaCosta is always doing something interesting with the camera. There is smart visual storytelling almost everywhere you look, from the clever use of mirrors, to edgy scene transitions, to set design that starts to mirror Candyman’s look in interesting ways. The jump scares are rare but hardly needed: all this contributes to a growing feeling of dread as the film speeds towards its bold conclusion.

Abdul-Mateen II (HBO’s Watchmen), who has done excellent work in a supporting capacity in recent years, masters a tricky lead role, perfectly charting Anthony’s descent into madness. He shares great chemistry with Parris, who proves as equally adept at deadpan humour as she is in more dramatic moments. And as William Burke, a Cabrini-Green resident who has his own history with Candyman, Zola’s Colman Domingo continues an incredible breakout year with another shifty, unpredictable performance.

It all amounts to a film that’s scary enough to have you recoiling from the nearer mirror for a while and timely enough to get you musing on its social themes long after the credits roll. Crucially, it’s also entertaining enough that you’ll want to watch it five times over. Just don’t say the name when you do.