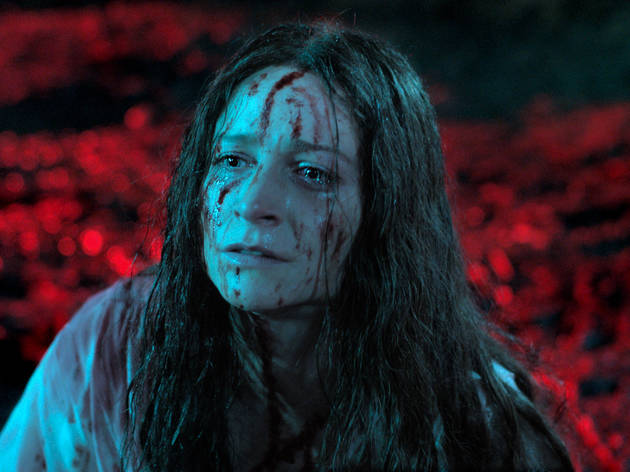 The dedicated BBFC film censor finally gets their due in this culty, knowing riff on the Video Nasty

The ‘Video Nasty’ controversy of ’80s Britain – when tabloids and self-appointed moral guardians pressured the BBFC (the British Board of Film Classification) to ban a number of straight-to-VHS horror films – is recreated in loving detail in this crafty lo-fi horror. Violence was ubiquitous at the time, with police bashing coal miners on the nightly news, Censor regularly reminds us, but it was apparently splatterfests made for a dime that would hasten society’s demise.

It’s a juicy backdrop for director and co-writer Prano Bailey-Bond’s impressive mix of psychological wig-out, judicious jump shocks and magnificently OTT body horror. Censor boldly attempts to imitate, spoof and critique that strand of VHS cult horror all at the same time – and it says a lot for Bailey-Bond’s confidence, and her game cast, that it manages it with stylised flair.

The censor of the title is Enid Baines (Niamh Algar from The Virtues). She spends her days cooped up in a stuffy screening room evaluating B-movies with names like ‘Cannibal Carnage’, ‘Deranged’ and ‘Rat Brothel’. Suffice to say, the LOLs do not come as thick and fast as the splattery viscera and flying body parts. ‘I’ve only trimmed the tiniest bit off the end of the genitals,’ she reports, in one of the lines of dialogue that lingers. Sleazy producers (look out for Michael Smiley as a kind of B-movie Harvey Weinstein) and mansplaining colleagues abound.

It’s a job, in other words, that takes far more than an after-work pint to shake off. Doubly so, considering Enid is still ruminating over the disappearance of her sister in the woods outside London. She’s haunted by fragmented memories of a beast man and a cabin in the woods that are rekindled when she watches ‘Don’t Go into the Church’, a film by cult filmmaker Frederick North that’s weirdly similar to her own sister’s fate.

Bailey-Bond, who explored this world with her 2015 short film Nasty, plots Enid’s descent expertly as she tries to find out what happened to her missing sister. The lines between reality and fiction first blur, then disappear entirely. There’s a strange unease in watching this moral guardian drift off her axis and Censor exploits it to its fullest with canny transitions and shifts in aspect ratios and film stock. Rocks’ composer Emilie Levienaise-Farrouch’s eerie soundscapes compete with screeches and screams as it heads towards its creepy payoff.

Censor wears its genre influences on its sleeve – The Shining, Cronenberg, Carrie and Peter Strickland’s similarly themed Berberian Sound Studio – but it’s very much its own thing. Count Bailey-Bond (and her mostly female department heads) as another addition to a new wave of female-led horror filmmakers that already boasts Saint Maud’s Rose Glass, Relic’s Natalie Erika James and Make Up’s Claire Oakley. It won’t be long before they’re the ones doing the influencing.