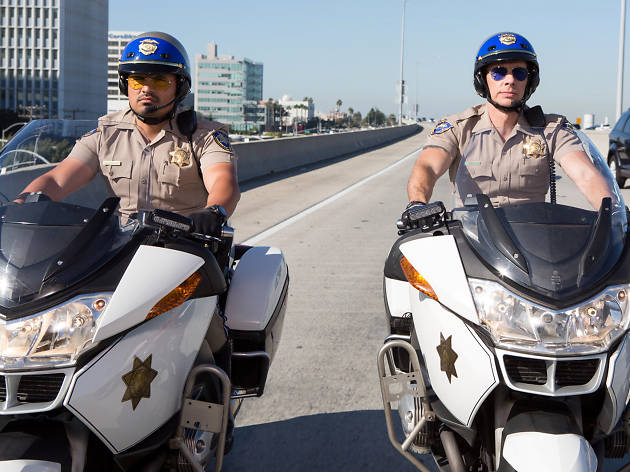 It’s not a fly-on-the-wall doc about your local fish shop, or even a warts-and-all biopic of Tom Hardy’s dad. No, this horribly misguided Hollywood ‘comedy’ is actually a ’21 Jump Street’-style reboot of a dimly remembered late ’70s TV series about two mismatched Los Angeles motorcycle cops that used to screen on ITV at teatime when they’d run out of episodes of ‘The A-Team’. But even if you’ve never seen the show, the movie version will fill you with fond nostalgia – for your last dentist’s visit, perhaps, or that time you stepped on a rusty nail. Any time before you found yourself in a cinema watching ‘CHIPS’.

There’s only one man to blame for this travesty: writer, director and star Dax Shepard, a leathery, low-rent Owen Wilson clone you might vaguely recognise from supporting performances in the likes of ‘Idiocracy’ and ‘Baby Mama’. Here, he’s John Baker, a retired motorbike daredevil who has parlayed his expertise in the saddle into a new job with the California Highway Patrol. When crack FBI agent Poncharello (Michael Peña) is assigned to pose as Baker’s partner and infiltrate a gang of corrupt cops, nervous rookie Baker is thrown neck-deep into the action.

‘CHIPS’ is the kind of movie that thinks employing a running gag about homophobia will make it okay to feature a limp-wristed character called Gay Terry. It’s a movie that assumes that if you repeat ad nauseam an unfunny joke about ass-licking, it will magically become hilarious. It’s so grotesquely misogynistic it makes ‘The Hangover’ look like ‘Thelma and Louise’: every woman on the California police force is either an object of trouser-rubbing lust or so old and ugly that they’re only good for a punchline.

Adding insult to injury is the fact that elsewhere Peña seemed finally to be getting the respect he deserved: turns in ‘End of Watch’ and ‘Ant-Man’ had given free rein to his effortless charm. But it’s going to be hard to forgive him for his mugging, grotesque performance here – once you’ve watched a guy break off screaming mid-wank at the realisation that he’s accidentally sex chatting with an older woman, nothing can ever be the same.