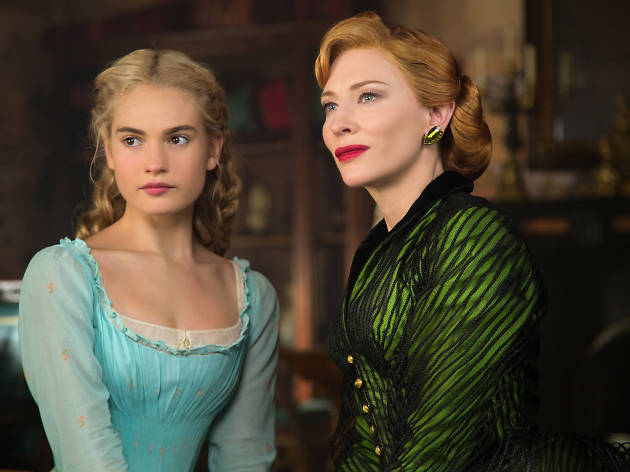 Enough with the feminism. Disney has clearly had enough of these uppity princesses getting all empowered and messing with their fairytales. After ‘Frozen’, and ‘Into the Woods’, it’s back to the basics of being a princess in director Kenneth Branagh’s lavish, sappily sweet version of ‘Cinderella’. That means microscopic waists, swooning bosoms and a happily-ever-after ending for this Cinderella (Lily James, the naughty cousin from ‘Downton’), or just plain Ella – the ‘Cinders’ bit comes later.

The film opens shakily with scenes from Ella’s idyllic childhood acted in a style inspired by the surrounding forest. ‘Have courage and be kind,’ says Ella’s mother (Hayley Atwell) with a saintly deathbed smile, so cursing Ella to a lifetime of smiling sweetly and talking in sing-song to her CGI pet mice. Cate Blanchett is wickedly good as her evil stepmother Lady Tremaine, dressed to kill in the style of a 1940s femme fatale with Veronica Lake curls and blood-red lipstick. This is a pretty faithful retelling of the classic fairytale, but Branagh and screenwriter Chris Weitz (‘The Golden Compass’) have rustled up enough of a backstory to stop Lady T being a straight-up psycho-bitch villainess. Left widowed and bankrupt by her first husband, she’s now bitter about being married to a man still in love with wife number-one.

You know the rest. Helena Bonham Carter is hilarious as the Fairy Godmother, a cross between Gok Wan and a toff racing-horse trainer after a few gin and tonics. ‘Would you mind if I gee it up a bit?’ she slurs, looking at Cinders’s frock. The stepsisters are more ugly on the inside, spoilt mean girls. And has Branagh been inspired just a smidge by Kate Middleton catching the royal eye? In the 1950 Disney animation, Cinderella was an aristocrat’s daughter. Here she’s a plain commoner and her Prince Charming (Richard Madden, acting with his eyebrows) is the heir of a small kingdom determined to marry the girl he loves – not some horsefaced posho.

It’s all very sweet and harmless, though you can’t help wishing that Cinders got her happy ending for more than being kind to her digital mice and weathering a lot of crap with a never-ending smile on her face.