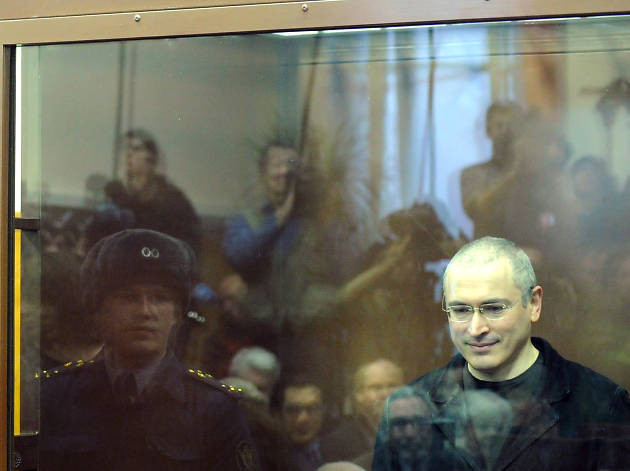 Alex Gibney takes a trip through Russia's corridors of powers in a doc that falls just short of compelling.

Being an oligarch is all (vastly expensive) wine and (billions of) roses, right? Not if this portrait of powerbroker-turned-dissident Mikhail Khodorkovsky is anything to go by. In the aftermath of glasnost and perestroika, when the Russian economy briefly turned into a drunk version of ‘Supermarket Sweep’, the lantern-jawed Muscovite filled his trolley with a bunch of Siberian oil fields. By 2003, he was worth $15 billion. By 2005, he was languishing in a Siberian prison, having spectacularly fallen out of Vladimir Putin’s favour.

Typically, director Alex Gibney (‘Enron: The Smartest Guys in the Room’) crafts more than just a cautionary, fall-from-grace tale. The documentarian has sharp journalistic instincts and he isn’t afraid to get into the dark heart of the Kremlin to lay to lay bare the machinations of Putin’s Russia. Khodorkovsky makes a compelling and, it has to be said, pretty intimidating subject, bringing brooding charisma and candour to his interviews. He’s also a handy conduit to study Putin himself, and the way the ex-KGB wonk has enshrined himself as the head of a kleptocracy.

To help, Gibney enlists a cast of interviewees, including well-placed Russian journalists and the BBC’s long-time Moscow correspondent Martin Sixsmith, who offers a mea culpa for his over-optimistic analysis of post-glasnost Russia. ‘The signs were there, even then, that it wasn’t going to work out,’ he rues.

‘Citizen K’ doesn’t try to find its way through this moral maze. Despite his conversion to the pro-democracy movement, Khodorkovsky is no saint and his possible involvement in a murder is left lingering. Instead, Gibney teases the idea that there is no way through, that Putin has essentially smashed his country’s moral compass. But unlike his stunning, prophetic ‘Enron’ doc, this one is interesting rather than unmissable, and the filmmaking style of archive footage and talking heads feels a bit conventional. In the era of Litvinenko and the Skripals, there are more essential docs to be made.