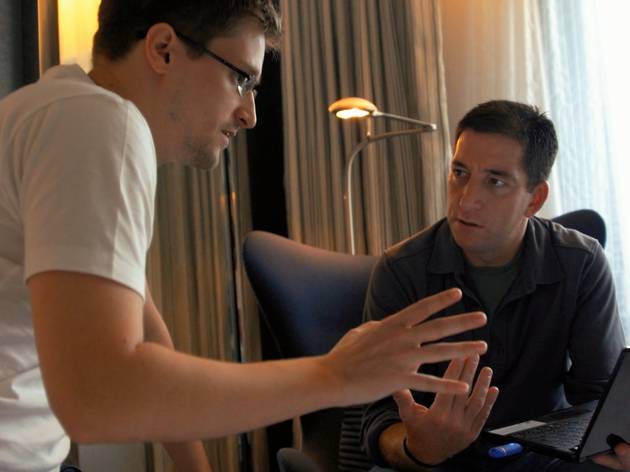 In June 2013, after several months of coded messages back and forth, US security worker Edward Snowden summoned three people to a hotel room in Hong Kong to reveal who he was and what he wanted. Two of the three were journalists: freelancer Glenn Greenwald and The Guardian’s Ewen MacAskill. The third person was documentary-maker Laura Poitras (‘Flag Wars’, ‘The Oath’), who has now turned the behind-the-scenes story of Snowden’s revelations into ‘Citizenfour’. Her film’s quiet, matter-of-fact sobriety is as chilling as the information Snowden revealed to Greenwald and Poitras in Hong Kong last year – that the US and UK governments were spying on their citizens to an extent beyond most paranoiacs’ wildest nightmares.

Even if you know Snowden’s revelations, they’re doubly striking when heard here, straight from the horse’s mouth and shared for the first time. Partly, ‘Citizenfour’ serves as a concise refresher of a complicated, multi-headed story that has been developing for over a year. Poitras offers helpful background, opening her film with the testimony of other whistleblowers and repeating high-up denials that anything of the sort is taking place.

But ‘Citizenfour’ is at its most eye-opening and essential simply as a portrait of the then 29-year-old Snowden at a point of absolute no-return in his life as he spends almost a week hiding out in Hong Kong before disappearing into an entirely new existence. He talks about his motivations; about leaving his girlfriend a note in their Hawaii home saying that he had gone on a long work trip; about cutting all ties with friends and family; about the near-inevitability that he would end up in jail.

Banal details are raised to the level of a thriller as Snowden sweeps back his hair in the mirror, hoping he won’t be recognised on the street, or bristles as a fire alarm is tested, wondering aloud if there are more sinister reasons for the loud noises interrupting their conversation. Poitras delivers an intimate, human sketch of Snowden, who comes across well: rational, considered, confident, with a hint of fragility. There’s a nobility to him entirely unforced by Poitras.

Once Snowden leaves the hotel room in Hong Kong to embark on a journey that would eventually lead to him living in exile in Russia, Poitras is left behind and her film loses some energy. The film’s later chapters hop from Berlin to Brazil to Brussels and feel more dutiful than driven. And then a final, recent encounter between Snowden and Greenwald snaps us out of any complacency and reminds us that this is very much a live story, and one that will run and run and run.

Director:
Laura Poitras
You may also like
Popular movies
We know this city. Do you?