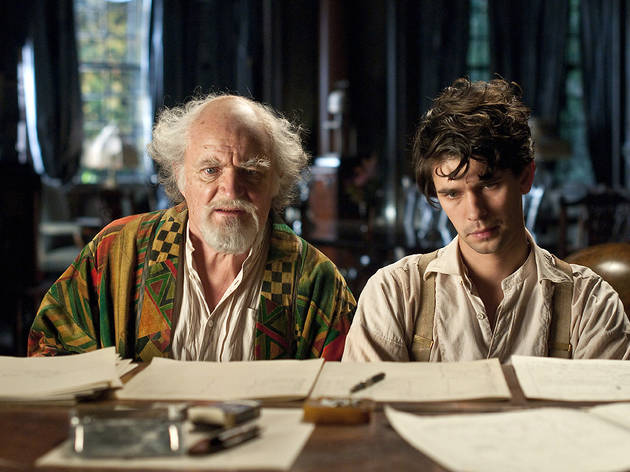 David Mitchell’s Booker-nominated 2004 novel ‘Cloud Atlas’ was a zeitgeist-grabber, but it always seemed a touch self-important, eager to ‘transcend’ its genre elements – comedy, sci-fi, mystery – as though Mitchell’s ambitions were somehow more worthwhile than his sources. The movie version has no such pretensions: in the hands of ‘Matrix’ directors the Wachowskis and ‘Run Lola Run’ helmer Tom Tykwer, ‘Cloud Atlas’ has become a technicolour explosion of a movie, an insanely ambitious, gorgeously realised and totally enthralling image-rush, which bounds from the sublime to the ridiculous and back again in the space of a heartbeat.

There are six stories here, spanning time (from 1849 to 2321) and distance (the Pacific islands to Edinburgh to ‘Neo Seoul’). The characters are linked only by a recurring comet-shaped birthmark, and the fact that they’re played by a revolving repertory company of familiar actors, led by Tom Hanks, Halle Berry and an impressive gaggle of notable British thesps.

This results in some of the most bizarre and borderline offensive casting choices in movie history: Hanks is terrific as an English doctor and an American scientist, but struggles as a rampaging Irish gangster-turned-author; Berry is perfect as a crusading Californian journalist but her appearance as a German-Jewish refugee is just creepy; Hugh Grant delivers the film’s juiciest turn as an oily power plant executive, but when he turns up as a tattooed futuristic cannibal warrior, the only appropriate response is laughter.

In a departure from the novel, all six stories are placed concurrently, and the result is a masterclass in cross-cutting. There’s not an ounce of fat here: each story has its own momentum, but thanks to a relentless series of cliffhangers and coincidences each tale also serves to drive the others forward, deepening the tension and resonance at every turn. The cumulative effect is unique and often breathtaking.

There are those who argue that ‘Cloud Atlas’ is undisciplined, overambitious and very silly. All of this is true, but when in epic cinema have those qualities been a hindrance? This is a movie which cuts from spry comedy in an Edinburgh old folks’ home to an eyepopping flying car chase in futuristic Korea without breaking stride; a film which casts Hugo Weaving as a Nazi conductor, a bleach-blond contract killer, a big-breasted nurse and Old Greg from ‘The Mighty Boosh’; a film which piles on the action, the romance, the philosophical inquiry and the silly accents until the viewer is left punch-drunk and reeling. Seriously, what’s not to love?