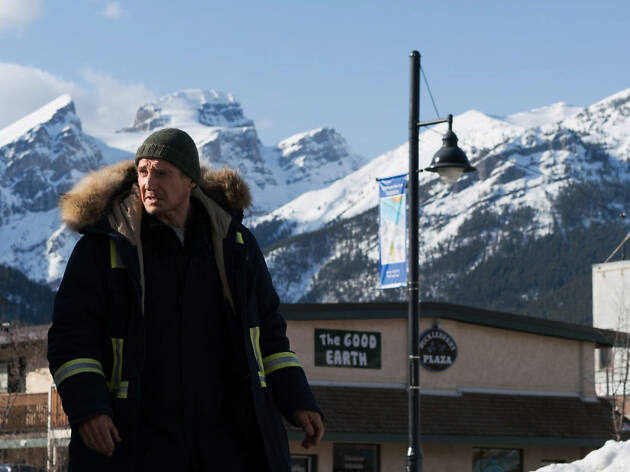 Amid personal controversy, Liam Neeson returns in a generic, false-feeling revenge thriller that suffers from bad pacing (and worse optics).

In the glacially paced and undisciplined Cold Pursuit—director Hans Petter Moland’s remake of his own 2014 Norwegian thriller In Order of Disappearance—Liam Neeson doesn’t possess a “special set of skills.” And still, his character, Nels Coxman, a wholesome snowplow driver who digs out roads around the fictional ski town of Kehoe, Colorado, somehow follows Taken’s vengeful-dad playbook with staggering proficiency. Once his innocent son falls victim to a complex drug operation and sets off a fatal feud between two rival families, no criminal seems too intimidating or out of reach to Nels, a freshly crowned “Citizen of the Year.” The body count avalanches quicker than we can process—helpful title cards eulogize the amusingly nicknamed fallen (Limbo, Speedo, Dante, etc.), Six Feet Under-style—while a cartoonish, alienating air of implausibility hangs over everything.

Not that Moland is after a realistic, philosophical interrogation of cold-blooded revenge anyway—and given Neeson’s own recent, deeply unfortunate racist remarks, that may be for the best. (At least his character isn’t driven by bigotry, though some of the other roles are casually plagued by racism and sexism.) Instead, Moland seems to lean closer to absurdity à la In Bruges or Fargo. But despite a fanciful score by George Fenton and fickle flourishes of deadpan humor, Cold Pursuit’s wit barely finds a target. Amid a crowded field of actors, only Tom Bateman and Tom Jackson (playing the leaders of competing cartels) dare to fully indulge in a sense of magnified silliness. Everyone else, including Emmy Rossum’s idealistic afterthought of a cop and Laura Dern’s grieving mom (who inexplicably exits the movie before she gets to shed a tear), seems stuck in something far less entertaining.

More troubling is Neeson’s baffling disappearance for long stretches of time, when screenwriter Frank Baldwin gets too enamored with the supporting clan while failing to expand upon them—he even drops the ball on an intriguing storyline involving a pair of gay criminals in love. Cinematographer Philip Øgaard accentuates the quiet, chilling beauty of the location work (some shots are straight out of wintery holiday greeting cards). Still, Cold Pursuit, weighed down by machismo, never quite breaks the ice.