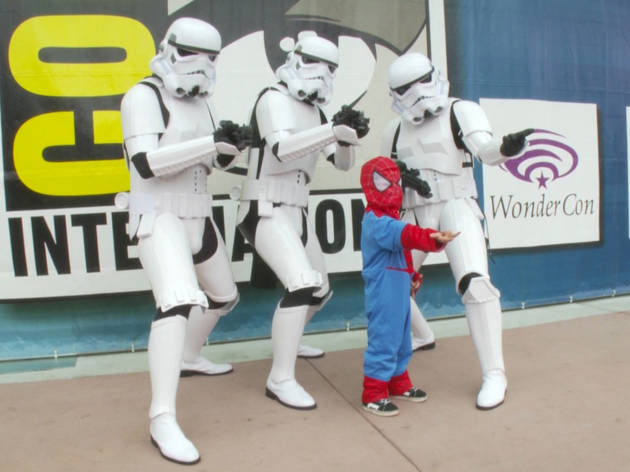 They come from everywhere, these great unwashed masses (emphasis on the second adjective) descending upon summery SoCal like locusts in Star Wars stormtrooper helmets and homemade superhero costumes. Gathered together under the roof of San Diego’s Convention Center, comic-book lovers, sci-fi aficionados, video-game fanatics and cosplay enthusiasts bond over their mutual interest in formerly adolescent-only pursuits. In the outside world, folks who argue over who’s the best Doctor Who (Tom Baker, duh!) or obsess over building a real, working Spider-Man web shooter are often treated like social misfits; once they enter the San Diego Comic-Con International, it’s the geeks who inherit the earth.

Morgan Spurlock’s documentary on this annual nirvana of unabashed nerddom touches briefly on the SDCC’s history, as well as the schisms that have erupted as various dweeb-niche cultures, now having colonized the mainstream, attempt to take over the event. But his affectionate look at this fanboy wet dream works best when it puts the Con-araderie front and center, interviewing idiosyncratic attendees and iconic figures (Kevin Smith, coproducer Joss Whedon) about the sense of community the gathering inspires. (It also proves that the Super Size Me director isn’t interested in only being a cult-of-personality filmmaker; Spurlock’s decision to stay behind the camera and not eclipse his subject is a wise one.)

Merely paying tribute isn’t quite enough for a feature-length film, however, which is why the filmmakers have also set up several Spellbound-like narrative strands: Can two aspiring comic artists impress visiting industry heads? Will the costume designer with a Mass Effect fetish take first prize in the convention’s “Masquerade” pageant? What will the proprietor of Mile High Comics do if he can’t sell enough of his wares? Is that geek dude going to successfully propose to his equally adorkable girlfriend or not? Nothing but 88 minutes of a gushy lovefest would have been grating, yet these episodic stories make the film feel like just another going-for-the-gold doc drumming up investment in a cultural curio. The Con’s still the thing; a game-changer like this deserves deeper anthropology instead of being reduced to a gladiatorial arena for aspiring fringe dwellers.