Days of the Bagnold Summer 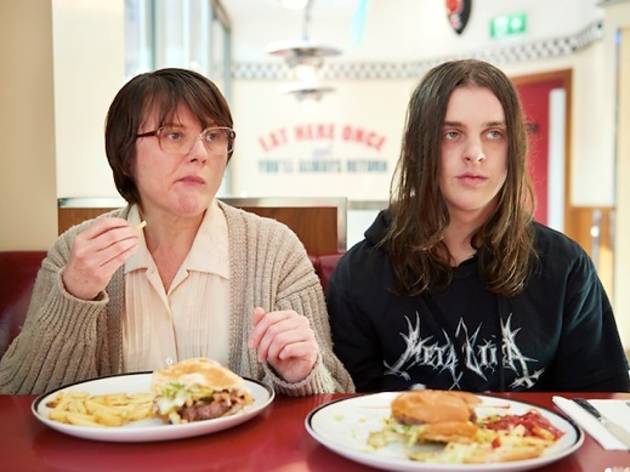 This heartfelt mum-and-son tale from debut director Simon Bird (‘briefcase wanker’ Will in ‘The Inbetweeners’) will dredge up mixed memories for anyone who has experienced an English summer stuck at home. Set over six long weeks, it strikes a nice balance of domestic rancour and gentle wistfulness. If it feels a little slight, there’s a tenderness that makes it impossible not to warm to. Most of all, it has Monica Dolan (‘Alan Partridge: Alpha Papa’) providing a rare, deeply sympathetic portrait of single motherhood.

Dolan plays mild librarian Sue Bagnold, mum to lank-haired metalhead Daniel (Earl Cave) and owner of a trusty labrador called Riley. Dad is long gone – off to Florida and a new fiancée – and Daniel has been invited out for the wedding. The invitation is both a respite from the boredom of school holidays and a token of his dad’s love, so when it’s retracted, the hurt is very palpable. Sue is left trying her best to pick up the pieces as her sullen offspring retreats into himself, his bedroom and his Metallica albums.

Adapted by Lisa Owens from Joff Winterhart’s 2012 graphic novel, ‘Days of a Bagnold Summer’ plays almost like the whacked-out British cousin to the skittish energy of ‘Scott Pilgrim vs the World’. If there are no evil exes for Daniel to fight, it’s only because he doesn’t really know any girls. Instead, his personal life boils down to a stormy friendship with his worldly mate Ky (he does know girls) and a mission to join a band of pint-sized rockers who rehearse in a neighbour’s garage. ‘What shall we call ourselves?’ they ask him. ‘Skull Slayer’, he suggests. When the boys acquiesce, it’s a rare moment of triumph.

Cave dials the energy levels right down as the moody Daniel, displaying a knack of sinking into himself in the awkward moments, while Dolan exudes warmth, intelligence and resilience as a woman whose self-confidence has taken knocks but who’s still out there fighting.

Bird brings their small suburban world to life nicely. The Bagnolds fill the hours with wary meals out, little rituals (Daniel begrudgingly lets his mum try his cake – but never the icing), and even that English summer staple: a disappointing trip to the seaside. Tamsin Greig is very funny as Ky’s patronising new age-y mum (‘My face is too angular for these,’ she tells Sue, trying on her glasses, ‘not nice and round like yours’), forever seeking to unlock Sue's inner pain, while Rob Brydon pops up as a sleazy history teacher with eyes for Sue – and every other mum in school.

The quirkiness won’t be for everyone, and a fondness for the fey songcraft of Belle and Sebastian, who provide the soundtrack, is required, but ‘Days of the Bagnold Summer’ is a noble stab at the kind of lo-fi indie comedy-drama American cinema so excels at. It all makes for a touching – and very English – watch.

Available to stream in the UK from Monday Jun 8.