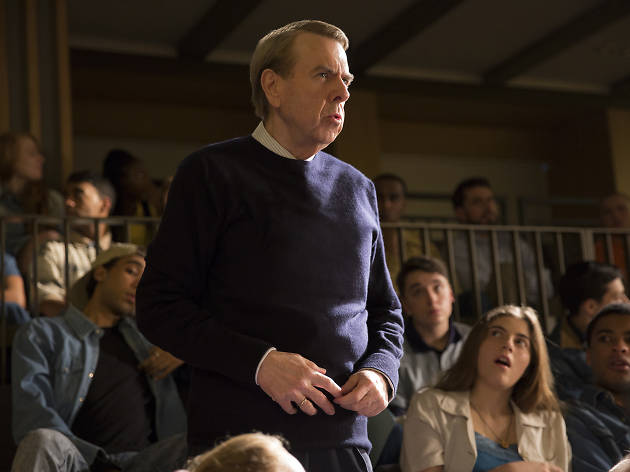 David Irving is one of Britain's most shameful sons: a once-respected historian who came to believe (or, at least, to claim publicly) that the Holocaust never happened, that it was all a conspiracy to provoke sympathy for the Jewish people. In 1996, Irving filed a defamation suit in the high court against American writer Deborah Lipstadt, who had taken him to task in her book 'Denying the Holocaust', calling his so-called evidence into question and accusing him of outright lies. The ensuing trial is the subject of this verbose, very watchable but blunt drama scripted by playwright David Hare.

Rachel Weisz is Lipstadt, a committed, emotionally driven academic determined to stand up and shame her opponent – to expose his dangerous, laughable arguments in a public court. But when her lawyer Anthony Julius (Andrew Scott) and her barrister Richard Rampton (Tom Wilkinson) both urge Deborah not to take the stand for fear of legitimising Irving's position, she's forced to examine whether she's most interested in facing the man or winning the case.

These are the strongest scenes in Hare's script, as the struggle between logic and emotion, between heart and mind, is forced on people who share the same side of a precarious and potentially historic case. Weisz plays Lipstadt as a spiky, not entirely sympathetic character faced with a wall of upper-crust, middle-aged British men in suits telling her how to fight her battles. Wilkinson is coolly precise as her not-quite-adversary, but Scott effortlessly steals every scene as the magnificently pushy and abrasive Julius, unable to allow Lipstadt three words without leaping in for a rebuttal.

And yet 'Denial' cries out for a little more subtlety. Timothy Spall plays Irving as a growling, spitting bulldog, and at one stage Weisz's character tells us that Deborah means warrior in Hebrew, just so we know she is one. Veteran director Mick Jackson ('The Bodyguard', bizarrely) keeps the visuals TV-movie flat, his sole artistic flourish an occasional jarring flashback to the horrors of Auschwitz. 'Denial' makes a compelling case, and the performers plead it persuasively. But the jury remains out on this one.