Depeche Mode: Spirits in the Forest 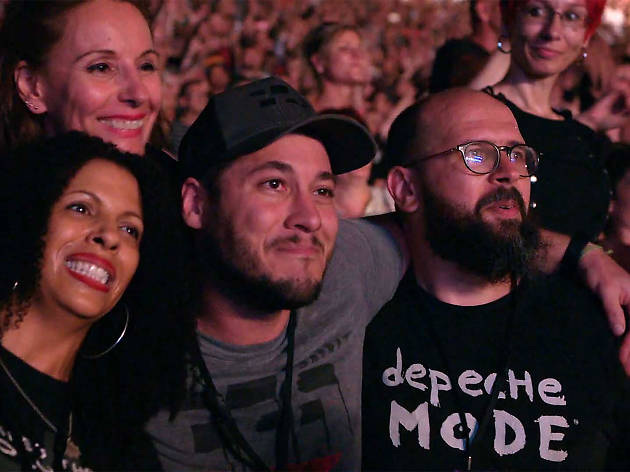 Concert doc meets personal journey in a fan-friendly film that promises a little more than it delivers.

Did Depeche Mode make a pact with the devil? With every tour, Basildon’s finest continue to pack stadiums, their rabid global fanbase somehow growing (or recycling, at least). The band has always inspired spiritual devotion, and with ‘Spirits in the Forest’, their music video director and past documentarian Anton Corbijn (‘Devotional’) shines his beautifully atmospheric spotlight on six of their most devout disciples, all on their way to see their heroes play in Berlin.

Among them is Indra, who lives with her grandmother in a spartan apartment in Mongolia and has never left her country before; Dicken from Bogotá, Colombia, who has formed a Depeche Mode tribute band with his kids, who live with their mother in Miami; and Carin from Perpignan, France who, aged 25, lost her entire memory after a car crash, remembering nobody and nothing except for her love for Depeche Mode. They are emotional stories, sensitively told and immediately compelling.

This is all, inevitably, interspersed with the obligatory concert footage, and the film flits perfunctorily between the worshippers and the gods. As concert films go, the performance itself – with lead singer Dave Gahan having now fully transitioned into a goth Mick Jagger – is nothing new. It would be nice to dive deeper into the genuinely interesting lives of these fans, but after strong set-ups, all that’s kind of jettisoned for the inevitable guff about the healing power of Depeche Mode. Still, they are memorable little slices of life, and the positivity –  as well as a fair share of heartbreak – that runs through this film leaves its mark.

Director:
Anton Corbijn, John Merizalde, Pasqual Gutierrez
You may also like
Popular movies
We know this city. Do you?