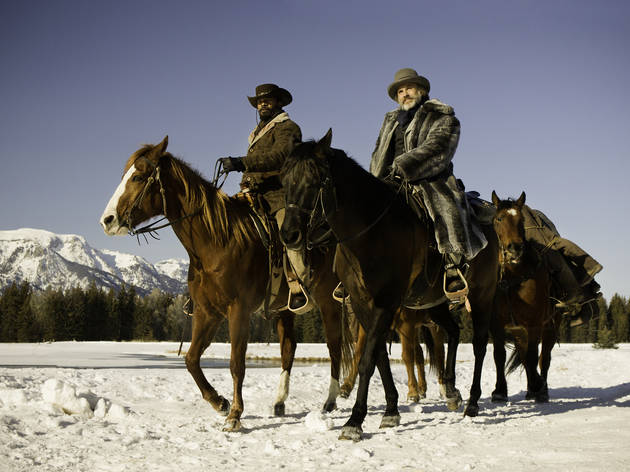 In the past decade there were those who – perfectly reasonably – assumed that Quentin Tarantino’s time had passed. Following the exhaustive movie-geek sprawl of the ‘Kill Bill’ movies, the crass indulgence of ‘Death Proof’ and the diverting but directionless ‘Inglourious Basterds’, it seemed like the ultimate fanboy had slipped into a terminal, self-congratulatory decline.

Well, somebody’s clearly rattled his cage, because ‘Django Unchained’, for all its digressive, episodic and frequently ludicrous nature, is a blazing return to form. This is a meaty spaghetti western, heavy on the spicy sauce and ketchup and peppered with the sort of unforgettable touches only Tarantino could get away with.

Last time around, Tarantino gave the Nazi top brass what for. This time, the topic for irreverent dissection is American slavery: Jamie Foxx is Django, freed from a chain gang by German bounty hunter Schultz (Christoph Waltz), and on a mission to rescue his wife, Broomhilda (Kerry Washington). Only trouble is, Hildy is owned by moustache-twirling Mississippi slavemaster Calvin Candy (Leonardo DiCaprio), whose ugly reputation precedes him.

The first thing to notice is how packed ‘Django Unchained’ feels. Tarantino’s love of pithy language hasn’t deserted him, but the dialogue never exists only for its own sake: every moment feels purposeful. The second is how great it looks: from the period design and incredible costumes – Foxx gets a dandyish blue silk number that could well spark a trend – to some gorgeous photography, particularly of human faces, this might be the director’s best-looking movie.There are problems: like every Tarantino film since the soulful ‘Jackie Brown’, ‘Django Unchained’ feels a little ersatz, favouring momentary thrills over lasting emotional punch. The romance between Django and Broomhilda is talked about in epic terms, but we never feel their connection, while the brutal dispatch of a couple of key characters late in the day is done with cold efficiency, when they deserved more.

But this is a film bursting with pleasures: the note-perfect performances (a director cameo aside, but that’s to be expected), a brace of close-to-the-bone, borderline offensive moments (Samuel L Jackson’s character will make jaws drop), the soaring cine-literate soundtrack, the sheer, relentless drive. So welcome back, Quentin. All may not be forgiven quite yet, but keep this up and even ‘Death Proof’ may vanish in the rearview.