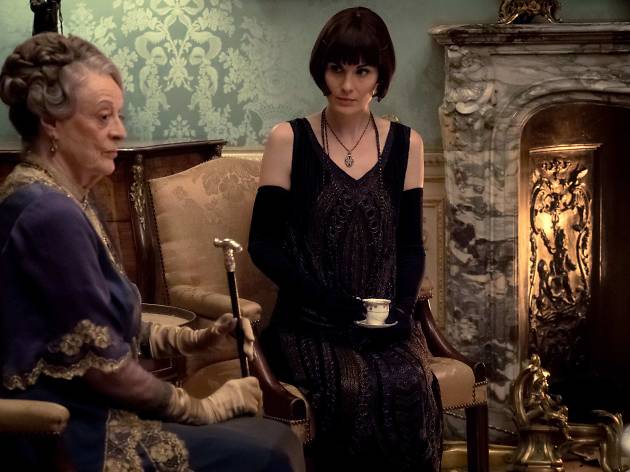 Downton fans get the big-screen adaptation of their dreams, though the casual viewer may get lost in all the politeness.

In a cinema landscape crowded with superhero smack-downs and CG apocalypses, it’s sometimes nice just to watch a film that wants you to worry about the whereabouts of some vegetables. That film is ‘Downton Abbey’, a big old comfort blanket of a movie stitched together from vignettes involving missing paper knives, a problematic ball gown and an unfortunate outbreak of rain. It’s as nourishing as one of Mrs Patmore’s crumpets, and about as edgy. Fans of the much-loved TV show will love it. America may need to be prorogued while it’s showing.

The film’s strictly notional plot has King George V and Queen Mary planning a visit to the giant stately pile of the Crawley family during their 1927 tour of Yorkshire. This news has the amiable lord of the manor, Robert Crawley (Hugh Bonneville), his American wife Cora (Elizabeth McGovern) and their modern-minded daughter Lady Mary Talbot (Michelle Dockery) in a spin: nothing less than the house’s reputation is at stake. Worryingly, his old chauffeur and now de facto family member Tom Branson (Allen Leech) is Irish. Could there be – good heavens – a Republican in their midst? ‘I do hope he’s not building a bomb,’ says someone, mildly.

Anyone unfamiliar with the ins and outs of ‘Downton’ may get a little lost in its small army of characters and their already-half-started plot lines. But prior knowledge of the show isn’t essential. And besides, this is a movie that knows what its core audience wants and provides it in spades. Everyone gets their moment to shine, and Maggie Smith’s acid-tongued Dowager Countess (basically Thanos in a tiara) gets about 17 of them. Her catty rivalry with Imelda Staunton’s similarly formidable aristocrat and her snarky asides are a highlight. Smith steals every scene she’s in, trowelling each line with ironic disdain, though David Haig is also quite fun as a controlling royal butler. His battles with the wily staff add some Wodehouse-lite capers.

If you’re a Downton fan, you’ll share the feeling. Yes, it’s basically an episode of the TV show stretched out to two hours but like the Crawley family silver, it’s so polished you can practically see your face in it.