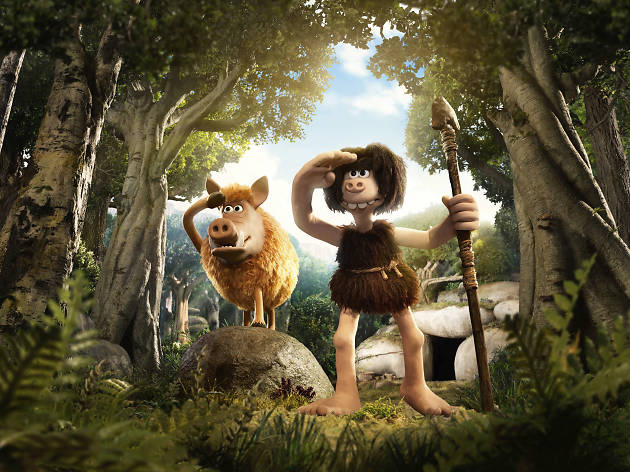 After bringing us a cheerily egg-headed Charles Darwin in ‘The Pirates! In an Adventure with Scientists’, Aardman heads to the other end of the evolutionary scale for a caveman-imation with a football subplot. Like ‘Escape to Victory’ with mammoths, the result is a sometimes jarring collision of underdog sports movie and prehistoric adventure, but one that still offers all of Aardman’s usual charm, daft jokes and glorious craft.

In the spirit of its central sport, it’s very much an animation of two halves. The first opens with the extinction of the dinosaurs and subsequent invention of football by prehistoric man (don’t ask), before skipping forward a few millennia to introduce its loveable band of dimbulb cavemen. Its heroes are Dug (voiced by Eddie Redmayne), a doggedly optimistic teenager, and his puppyish pig sidekick Hognob (grunted by Nick Park), but time is taken to give shape to the rest of the band too. Timothy Spall, in particular, has a ball as jaded village elder Bognar. ‘I’m old,’ he sighs. ‘I’m nearly 30.’

Other joys include a sight gag involving a huge prehistoric duck, a hint that director Nick Park might have also added Gary Larson to his rich and offbeat pool of inspirations. The handmade backdrops, meanwhile, are astonishingly realised. When a sudden attack on the cavemen’s valley shifts the action to the city of their Bronze Age conquerors (led by Tom Hiddleston’s avaricious overlord, Lord Nooth), Dug and Hognob find a Tolkienesque metropolis replete with gleaming detail and winningly corny puns (look out for a ‘carbon dating’ matchmaking service and the ‘Jurassic Pork’ food stall). The spirit of Ray Harryhausen – the richest of those inspirations – lives on in every frame.

The verve levels dip in the second half, though. The zingers dry up as Dug and co. train to take on Nooth’s formidable Real Bronzio team in a winner-takes-all football match. Spunky turncoat Goona (Maisie Williams) joins the team in time for training montages and motivational speeches. But Park struggles to subvert sports-movie clichés as hilariously as ‘The Curse of the Were-Rabbit’ played with horror tropes. It seems a strange thing to say about a film featuring a giant man-eating mallard, but a bit more eccentricity wouldn’t have gone amiss.

Director:
Nick Park
Screenwriter:
Mark Burton, James Higginson
You may also like
Popular movies
We know this city. Do you?