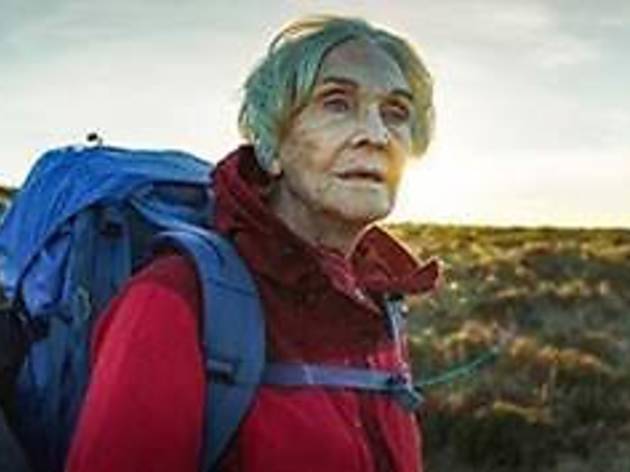 If you’ve ever wanted to see Sheila Hancock neck a can of Strongbow, ‘Edie’ is the film for you. Another entry into the profitable Brit subgenre of OAPs-find-a-new-lease-of-life, Simon Hunter’s film is marred by contrivance and predictability but gets by on a feel for life’s missed opportunities, a good heart and a strong central performance by Hancock as a woman finally realising her taste for adventure.

The set-up is delivered effectively: after her controlling husband dies, Edie is packed off to a care home by her equally controlling daughter. But rather than spend her time flower-arranging, she heads off on a dream expedition to climb Mount Suilven in Scotland. At this point, ‘Edie’ segues into an odd-couple relationship picture as the roaming pensioner literally bumps into Jonny (Kevin Guthrie) who – happily for Edie and conveniently for the plot – runs the area’s biggest camping shop. What follows is training montages, comedy slipping-in-mud, whimsical bike-riding, falling outs and reconciliations, all leading to a dramatic final-reel ascent of the mountain.

The writing is heavy-handed (Jonny keeps reminding us how inspiring it all is) and there’s little in the way of adventurous filmmaking (it overplays the manifold helicopter shots to the extent it might have been sponsored by the Highlands tourist board). But there is nice chemistry between the central pair; and as you’d expect, Hancock owns it: Edie is a character who doesn’t beg to be liked – when she drops an F-bomb, it is for real, not for comedic effect – and Hancock etches a life of disappointment only now being fulfilled with economy and authenticity. It doesn’t have the balls to be ‘McHarold and Maude’, but it does deliver an engaging, prettily scored (Debbie Wiseman), likeable warning about the dangers of wasting your life.

Director:
Simon Hunter
Screenwriter:
Elizabeth O'Halloran
Cast:
Sheila Hancock
Kevin Guthrie
You may also like
Popular movies
We know this city. Do you?