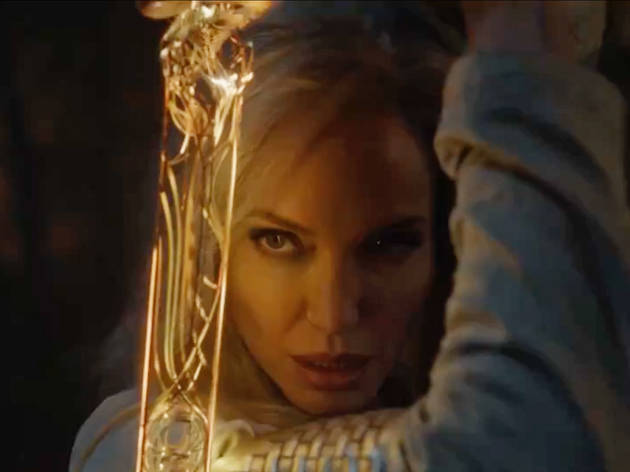 Oscar-winner Chloé Zhao tries to make the MCU a more thoughtful place, but winds up with a film that’s neither particularly profound nor entertaining

Marvel’s been going through an experimental phase of late. TV shows WandaVision and Loki went really high-concept, with good results. Shang-Chi was more fun buddy comedy than action spectacular. But experiments don’t always work. Departing from Marvel’s snarky, wham-bam formula, Eternals is an attempt to do straight-faced sci-fi. Sadly, the result is over-stuffed and underpowered.

Marvel nabbed director Chloé Zhao before she won her Oscar for Nomadland. You can see why she was picked. Eternals is a story about humanity and nature versus nurture. Zhao likes unhurried stories that dig into the human condition, but she has little time to scratch beneath the surface with Eternals. With ten new heroes and a story that covers all human history, there’s simply too much to get through.

The Eternals are God-like alien beings, sent to Earth by a bigger God-like being to protect humankind from not-entirely-explained monsters called Deviants. Eternals have been on Earth for 7,000 years, sworn not to interfere unless Deviants are involved. They’ve watched wars, genocide and endless destruction, reluctantly letting humans make their own mess. After millennia on standby, they’ve gone their separate ways. Then the Deviants return.

Much of the film is a ‘let’s get the band back together’ quest. The problem is we’ve barely met the Eternals before we’re supposed to invest in their internal tensions. Marvel used five films to introduce the members of the Avengers before uniting them. Eternals wants the same impact in one. Even with a 157-minute running time, there’s too little time to do more than sketch both characters and story.

With a script that’s largely exposition, many actors struggle here. Poor Gemma Chan and Richard Madden don’t stand a chance with Sersi and Ikaris. She’s the earnest heart of the group, with the ability to transform matter and the inability to enjoy herself. He has the powers of Superman but not the humanising Clark Kent personality. Their romance has all the fizz of 7,000-year-old lemonade. Brian Tyree Henry is the most fleshed-out as a mechanical genius who grows tired of humans using technology to kill each other and just wants to live quietly with his husband and child. Angelina Jolie, an old hand at bringing oomph to poorly-written blockbusters, shows everybody how a movie star does it, swaggering about as warrior Thena. There are beginnings of interesting-ish stories for the others, exploring how Gods might amuse themselves on Earth – Barry Keoghan’s mind-controlling Druig builds himself a small cult – but they’re abandoned before they’ve begun.

Many MCU movies tail off toward the end, as CG fisticuffs take over. Eternals improves in its last half-hour, finally creating some meaty conflict within the group and pulling out grand, odd imagery after hours of flat visuals that get poor value from the $200 million budget. It’s a late, small reprieve for a movie that has some bold intentions but dreary execution. You have to commend the effort to take the MCU in a different direction, but there’s little else worthy of applause.