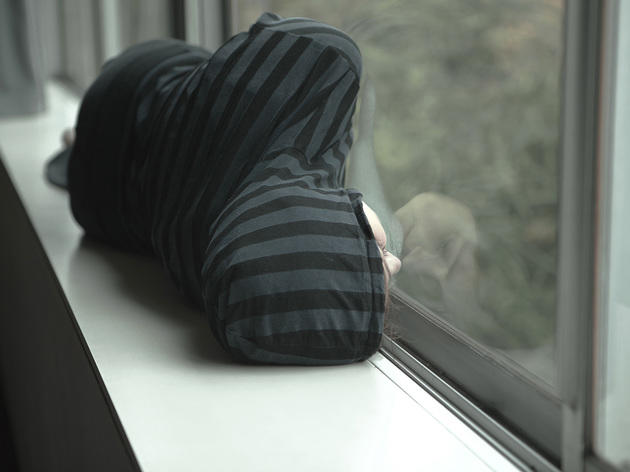 The English director Joanna Hogg has a knack for making us squirm. Her new film, ‘Exhibition’, is an experimental at-home-with drama about two London artists, D (Viv Albertine) and H (Liam Gillick) who have lived together in a modernist house for 18 years. Now – for reasons unclear – they’re about to move. In some ways this is a departure from Hogg’s previous films, ‘Unrelated’ and ‘Archipelago’, both of which were portraits of unhappy, posh families on holiday. It’s urban. It’s less talky. It offers a hint of the surreal. It even has a whisper of horror about it.

But like those films, ‘Exhibition’ succeeds in making us feel deeply uncomfortable for peering into other people’s lives. There are times here – when D is rehearsing some strange art performance, or when D and H are going through the motions of sex – that you’re not sure where to look. There’s something about the way Hogg casts non-actors (Albertine is a former punk star; Gillick is an artist) that only increases the discomfort.

Another big difference between ‘Exhibition’ and Hogg’s earlier films is that here she’s more comfortable exploring the gaps between conversations and interactions. Talk recedes, and instead we’re asked to concentrate on other noises – the roadworks outside or the internal sliding doors opening and shutting. For a lot of the film, we’re observing these characters, alone or together, not necessarily engaging. It’s a compelling study of a relationship, but one that demands patience. It’s curious and mysterious, as if we don’t have enough information to make a judgement call on them.

That’s not to say ‘Exhibition’ is inaccessible or aloof. There’s sly humour to it, and some of the bursts of talk – especially meetings with the neighbours – are spiky and funny. Certainly, there’s something very particular about D and H being artists that makes their lives feel distant from most of us. Yet ‘Exhibition’ also reminds us that behind closed doors, all families, relationships and affairs look very odd when you put them under the microscope.