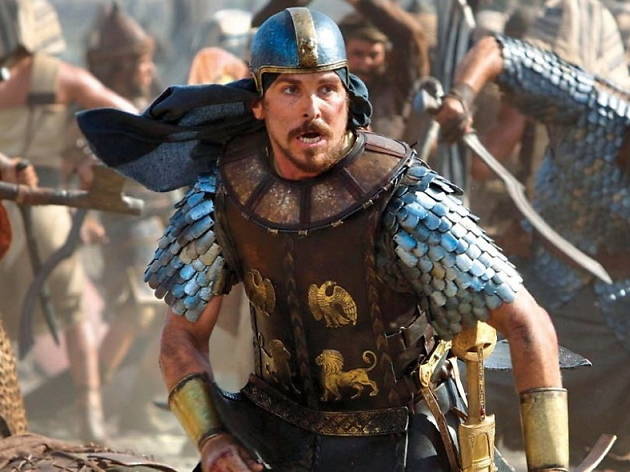 Exodus, more so than any other episode of the Old Testament, is a story that exists in order to be retold. While most of the major milestones on the Jewish calendar are observed via one-way conversation with God, only on Passover do those of the Jewish faith explicitly recite history to each other. By that logic, Ridley Scott can't be faulted for wanting to stage a version of this saga. Framing the story as a parable about how the men who lust for power are often the least equipped to wield it, 'Exodus: Gods and Kings' begins in the middle of the tale, introducing Moses (Christian Bale) as a reluctant hero and a non-believer until his past comes to light and he’s banished by his adoptive brother, the paranoid Pharaoh Ramses (Joel Edgerton: bald, bronzed and palpably uncomfortable in the role long before God starts to make his skin blister).

Recalling the shortened theatrical cut of Scott’s 2005 'Kingdom of Heaven' (but without that movie’s raw promise), 'Exodus' plays like a miniseries that’s been disemboweled of its drama and imagination with a butter knife. The handful of revisionist touches that survive to the screen are enough to make you glad there aren’t more: instead of parting the Red Sea, Moses watches it wipe out the pursuing Egyptians in a single CG tidal wave, a glaring reminder that iconography doesn’t endure for thousands of years by accident.

The ultimate takeaway is that if you can’t finance a $140 million epic about ancient Egypt with racially appropriate actors, maybe you shouldn’t make a $140 million epic about ancient Egypt. Scott has been raked across the coals for using star power as his excuse for whitewashing the movie, but while all films compromise in order to get made, those compromises are much harder to forgive in a film that feels as though it only got made because it could. Let my people go see something else.