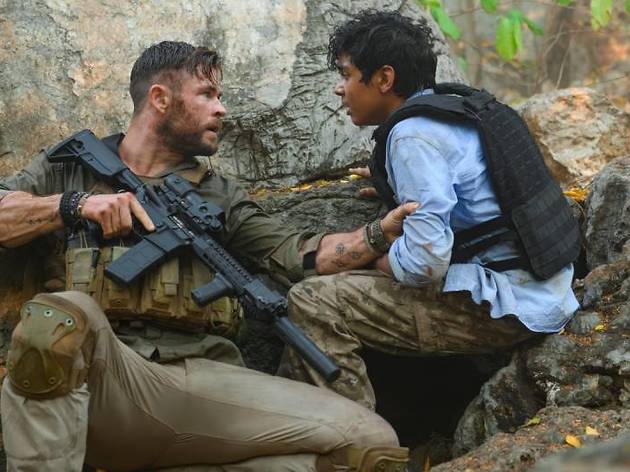 Heady with cordite fumes and high on its violent spectacle, this Chris Hemsworth-fronted action-thriller makes for a surprise-free but passable lockdown watch.

Until recently, Netflix might have been hoping this watchable but workmanlike action-thriller would draw in viewers fresh from a new Bond movie and looking to plonk down on their sofas and re-up on stunts, shadowy killers and a jaded protagonist fond of a drink or two. Fast forward a couple of months and – thanks to the lockdown – ‘Extraction’ is the new Bond film – or at least, as close as we’re going to get to it. Which, for all its muscular action sequences and extravagant pyrotechnics, is not very.

In Chris Hemsworth, it does at least boast a bona-fide A-lister doing a passable 007 audition. He plays a world-weary Australian mercenary with the improbable name of Tyler Rake. After a brief flash forward, we meet him downing a beer, lobbing himself 30 metres off a cliff and meditating at the bottom of the lake below. As you do. Rake has a tragic backstory and, it quickly transpires, a bit of a death wish. Essentially, he’s Mel Gibson’s Martin Riggs in ‘Lethal Weapon’, only without the mad eyes and volumising shampoo.

As the title implies, Rake is on a rescue mission: the sensitive son of an Indian drug baron, Ovi (Rudhraksh Jaiswal), has been abducted by Bangladesh crime lord Amir Asif (Priyanshu Painyuli) and secreted somewhere within the dusty city limits of Dhaka – and he has to find him and get him out. ‘Get your hands on this kid, it’s gonna get complicated,’ his handler warns him. ‘It’s always fuckin’ complicated’ comes the reply. We meet Amir downing a bottle of juice and having a child thrown off a building and that nonchalance suddenly seems ill-advised. Plus, there’s a rival mercenary out there ready to make things personal.

Happily, Rake turns out to be pretty indestructible as he rampages around a city in (yes) lockdown fighting off dozens of goons, soldiers, gangsters and at one point what seems to be the entire cast of ‘Warriors’. (If ‘Extraction’ feels like a play for the massive Indian market, Netflix isn’t making too many friends in Bangladesh here – the insanely corrupt Dhaka of the movie feels like South Asia’s answer to Mos Eisley.)

Hemsworth handles the action as impressively as you’d expect from a Marvel veteran – and there’s plenty of it. Stunt-coordinator-turned-director Sam Hargrave presides over a creative array of Rake-administered offings – including one, amusingly, involving an actual rake. As you’d expect with that CV, Hargrave is here to deliver nutso action, and in one thrilling ten-minute sequence, he does just that: It begins with a car chase, ends with a truck chase and has a foot chase in the middle. It’s hands down the film’s highpoint.

But while the action is slick, sweat pours off the dramatic interludes as ‘Avengers: Endgame’ co-director Joe Russo’s script strains to build a touching surrogate father-son dynamic between Rake and his young charge. Hemsworth isn’t given a lot to work with as a man whose two main character traits are inscrutability and taciturnity, and his instinctive comic timing is left largely untapped. Maybe it’s the writing or maybe a rare achilles heel in the charismatic Aussie’s repertoire – as also evidenced in ‘Snow White and the Huntsman’ and ‘Black Hat’ – but the movie drags when it reaches for a deeper emotional resonance. The result is something that packs some of the visceral punch of a Tony Scott action thriller but little of the heart: not so much ‘Man on Fire’ as ‘Man Smouldering Gently’.