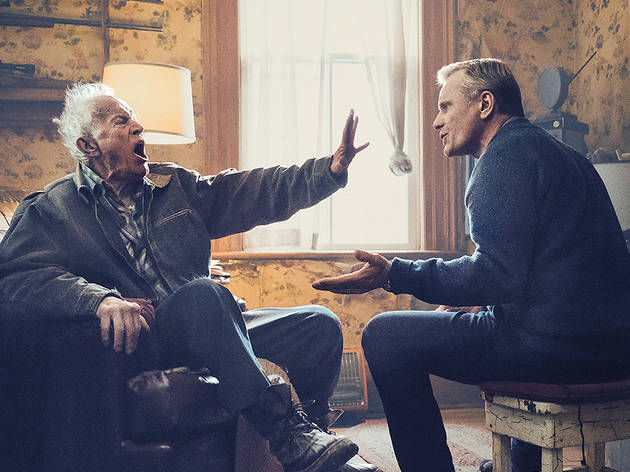 A huge breakout role, no matter how far into a star’s storied career, can come to define them in ways which appear inescapable. No matter how much indie excellence Robert Pattinson and Kristen Stewart pump out, almost every review will mention their time slaking the thirst of Twilight stans. Alas, the same is true of Viggo Mortensen. He may have turned in The Indian Runner and Crimson Tide first, plus Far From Men and Eastern Promises since, but try and spot a story on the man without at least one mention of Aragorn.

It’s decidedly unfair. A polymath across a wide range of creative outlets, taking in music and art, he’s now added writer-director to the list with Falling. Debuting at Sundance at the start of 2020, the film doesn’t mark a complete break with acting. Mortensen also stars as John, a happily married gay man living in Los Angeles with Asian-American husband Eric (Terry Chen) and daughter Monica (Gabby Velis).

Their blissful life, which features visits from John’s sister (Laura Linney), is turned on its head by John’s decision to take in his estranged father Willis (Alien’s Lance Henriksen). The old man has dementia and is no longer capable of living alone on his farm. The problem? He’s a raging homophobe with pretty much all the ‘-isms’ on the side, racism and sexism included. And so for two hours we’re subjected to little more than a horrendously OTT, pantomime villain performance from Henriksen, stuck in furiously cranky mode. The homophobic slurs, in particular, come thick and fast, almost managing to make Quentin Tarantino’s use of the N-word seem restrained. It’s risible.

The soap opera-like melodrama simultaneously asks us to take pity on his decline, partly by deploying flashbacks to a younger Willis, as played by Borg vs McEnroe star Sverrir Gudnason, and his suffering wife Gwen (Hannah Gross). While these sequences aren’t as nails-on-chalkboard, they hardly build a case for us to care about his fate. This hamstrings a film that has little on its mind beyond groping for an unearned redemptive curve. It never quite achieves it.

Wherever you fall on the debate about who gets to tell what story and how, it does seem somewhat odd subject material for Mortensen, a heterosexual man. His lack of lived experience shows in this frustratingly formulaic and profane plod. Perhaps ‘write what you know’ is sage advice? Less is more would have aided on the directorial front too. But straight men playing gay is over-rewarded Oscar-bait, so maybe it’s a wise career move after all? We’d just rather watch a Lord of the Rings marathon.

Out in cinemas and available on VOD in the UK Dec 4.