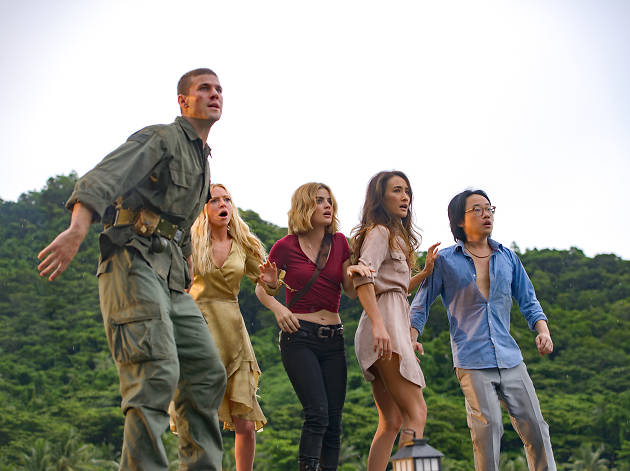 If you dug even a little into its mystical tropical paradise, its enigmatic, white-clad proprietor and his dream-seeking clientele, it was easy to find something a little ‘off’ at the heart of seemingly kitsch late-‘70s telly hit ‘Fantasy Island’. Even if die-hard fans weren’t exactly clamouring for a genre spin-off four decades on, surely it wouldn’t be hard to mine that creepiness for horror potential? Apparently so. Directed by Jeff Wadlow, the man behind the equally listless ‘Truth or Dare’, this Blumhouse adaptation is overwrought and poorly plotted, tangled up in its convolutions and shorn of the original’s retro appeal.

Those who are sufficiently familiar with the vintage edition might appreciate nods to the show (someone shouts ‘The Plane! The Plane!’), but beyond that, old-timey TV-version aficionados will be bored to tears – and not just them. Bringing to mind anything from ‘Saw’ to ‘Black Mirror’, the shallow and scare-free script by Wadlow, Jillian Jacobs and Christopher Roach is an equal-opportunity offender across generations.

True to the source material, the mysterious Mr Roarke (Michael Peña, successfully updating Ricardo Montalbán’s suave on-screen persona) calls the shots. Welcoming a private flight full of lottery winners to the resort, he promises them one immersive, fully realised fantasy each that comes at a price. Among the guests are: Lucy Hale’s social media-savvy go-getter looking to punish her high school’s mean girl; a pair of upbeat, high-fiving brothers who want it all; a wistful, romance-starved loner (Maggie Q); and a driven cop, yearning to honour his heroic father.

Bypassing a proper set-up and leaning hard on some ludicrous hallucinatory visuals (there’s a ghoulish presence that materialises at random and some inexplicable goo that bleeds out of things), ‘Fantasy Island’ gradually intertwines these characters’ fates with a twist so comical that it does for any remaining tension. A wooden ensemble, paper-thin frights and dull TV-special looks don’t help matters. ‘This place doesn’t suck,’ someone observes early on. If only.