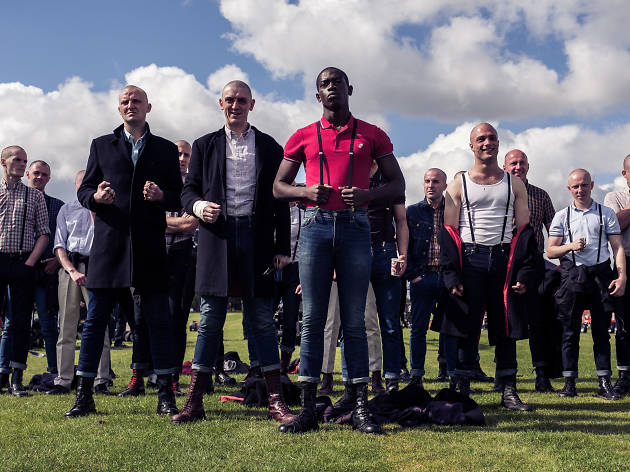 Adewale Akinnuoye-Agbaje brings his own bleak formative years to the screen in a racial drama that’s never quite as hard-hitting as it ought to be.

The era of Enoch Powell-inspired, Fred Perry-clad skinheads has been charted plenty on film down the years but never with quite such a chewy conceit as the one essayed by writer-director Adewale Akinnuoye-Agbaje in his bleak filmmaking debut. It’s based on his own experiences as a Nigerian foster kid ‘farmed out’ to a family in a racist corner of 1970s Essex that saw him join (yes, really) a group of racist skinheads. Its stew of spiralling psychological collapse, family drama and bovver-boy fight scenes doesn’t always gel, but when it does, it leaves a bruising impression.

Akinnuoye-Agbaje’s onscreen avatar is Enitan (Damson Idris, ‘Black Mirror’), whose slow retreat into himself and eventual reinvention into a droog-like thug comes despite the best efforts of his well-meaning teacher (Gugu Mbatha-Raw). Seemingly lurking around just about every corner is the gang’s charismatic ringleader, who takes a twisted delight in having a black man in their number.

This is movie terrain that’s land-mined with potential clichés, and ‘Farming’ definitely steps on a few, with on-the-nose dialogue and broad characterisations robbing it of some of its guttural power. There’s moments when it strains for operatic and lands closer to soap opera, too, especially in the beige interior scenes stalked by Enitan’s fag-puffing, blithely racist foster mum Ingrid (Kate Beckinsale, pretty broad).

There’s a potentially sharp juxtaposition between the thuggish racism of the skinheads and the supposedly ‘harmless’ racist epithets thrown about by Ingrid within earshot of the younger Enitan, but little is made of it. The fact that the seeds for his later descent into self-loathing and denial of his identity are planted in this supposedly nurturing environment should be much more impactful.

But if ‘Farming’ lacks a scalpel-like subtlety to dissect the material, it still presents a confronting depiction of self-loathing and psychological abuse, and a have-a-serious-word-with-yourself statement on British nationalism. It has a kernel of raw torment and an unforgiving streak that hints at still-unreconciled wounds, too. It’s not the best film of the year, but it’s definitely one of the most personal.