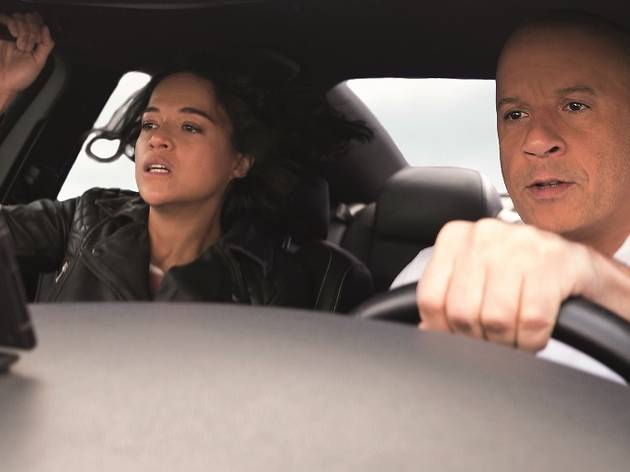 Remember when the Fast and Furious franchise was about fast cars racing furiously? They were halcyon days. The drag racing films felt fresh in an era of action movies where almost everything is faked in the comfortable safety of a green screen sound stage. Sadly, the never-ending adventures of Dominic Toretto (Vin Diesel) have since slunk into exactly that. A tedious morass of CG blah further hamstrung by histrionic soap opera.

The Fast ‘family’ includes Michelle Rodriguez as Letty, rappers Tyrese Gibson and Ludacris as Roman and Tej respectively, plus Game of Thrones’ Nathalie Emmanuel as Ramsey. They’re mired in a never-ending drift of sub-par spy antics that can’t hold a candle to either the Bond or Mission Impossible series. Long gone is the genuine awe returning director Justin Lin once brought to live-action crash and smash sequences.

Fast & Furious 9 is, without doubt, the worst of the franchise’s recent additions – and it’s abundantly happy to insult our intelligence too. No, I’m not talking about quips about the laws of physics after a car has just swung, Tarzan-like, on a rope over a cliff. Or the wildly inconsistent abilities of magnets, or a Ford Pontiac ejected into the cold, dark abyss of space.

At this stage in the franchise, dumb stuff like that is a given. But when the screenplay, such as it is – co-written by Lin and wingman Daniel Casey – calls for Gibson to repeatedly drop a clunking joke about how surreal it is none of them are capable of dying, it’s as tiresome as it sounds.

If pretending that the late Paul Walker’s Brian is still around isn't complicated enough, especially when his wife and Dom's sister Mia (Jordana Brewster) is back on board, we now have a heretofore unmentioned evil brother for Dom to contend with too. John Cena is required to be perma-surly in this thankless role. With Dom also on a downer, the only person who seems to be enjoying this outing less is the totally checked-out Rodriguez. Who can blame her? The script literally calls for her to respond to Mia’s cheery, ‘Dom’s my brother, but you’ll always be my sister’ with the ashen-faced, grim inexplicability of, ‘Isn't it funny how we all have secrets?’

It’s no secret all involved enjoy stratospheric paycheques, so a ‘Fast X’ would seem inevitable. As for this entry, no one’s here for the plot, but just in case you're wondering, it involves a doomsday weapon McGuffin, an idea stolen from the last outing. Fast 9 can’t even be bothered coming up with its own stuff anymore, as evidenced by carbon copies of the truck flip from Christopher Nolan’s The Dark Knight, and a fight sequence in Edinburgh’s streets that's poached from Avengers: Infinity War. It's a bloated two-and-a-half-hour mess. An endless patchwork of weightless, computer-drawn blah and fake out ‘deaths’ that underline the total lack of stakes.

The only real respite rests squarely on the shoulders of two women who deserve far better than this. Helen Mirren is as game as ever as the diamond and emerald necklace-stealing revhead Queenie, in a go-to-the-toilet and you’ll miss it cameo. Then there’s the all-too-sparing return of Charlize Theron as cyber-terrorist Cipher, no doubt because the usually charismatic Cena is a non-starter. The Mad Max: Fury Road star makes more impact walking across the screen in red leather pants than any of the stunts in this deadly dull car crash of a movie.

Fast & Furious 9 is in Australian cinemas now. Out in UK cinemas Jun 24 and US theaters Jun 25.