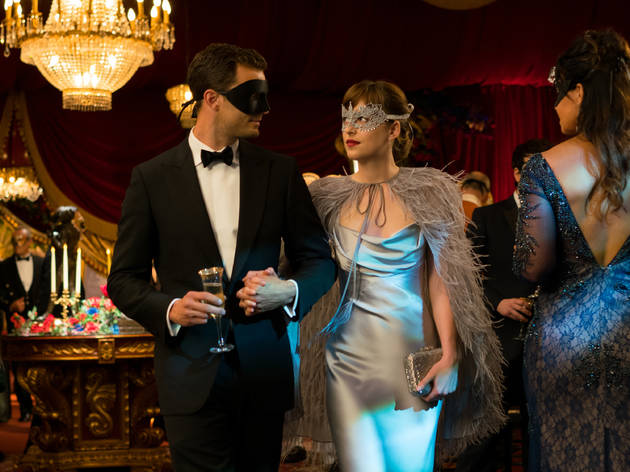 There should be a lot to talk about here: a stalker, a helicopter crash, a gun fired, a cocktail hurled in anger. But each new plotline is halfheartedly picked up, partially resolved and then forgotten about within minutes. A few graphic-lite sex scenes (spanking, sex toys and Ana whispering her demands like a seven-year-old asking for ice cream) are thrown in, presumably in the hope that we’ll be too busy drooling to notice the insubstantial plot.

As ‘Darker’ begins, the couple have separated; after one whip too many, she walked out on their contracted arrangement. But chiseled, complicated Christian wants her back and Ana puts up little resistance. After a fortnight apart it’s clear that she has forgotten everything she learned in the first movie.

The pair rekindle their relationship, supposedly on new terms: no rules, no punishments and no dietary requirements. But little about their new situation is convincing. Ana refuses to be ‘owned’ but Christian still groans ‘you're mine' during sex and buys the publishing company where she’s working as an assistant. The film goes some way to explaining his controlling behavior, but in truth spends more time perving over him flexing his muscles in the gym.

Jamie Dornan and Dakota Johnson are both charismatic and watchable, and do what they can with what they’ve been given. But what they’ve been given is an incoherent plot and a hefty helping of toe-curling dialogue. ‘I was trying to be romantic but you distracted me with your kinky fuckery,’ says Ana early on, which had the audience I watched with sniggering.

Director Sam Taylor-Johnson parted company with the franchise after ‘Fifty Shades of Grey’. Her replacement, James Foley isn’t trying to improve on the source material (perhaps unsurprisingly, given that the script this time around is written by author E L James’s husband Niall Leonard). But nor does ‘Darker’ wallow in the silliness of the Fifty Shades universe. It's not credible. It's not exciting. And it's just not very entertaining.