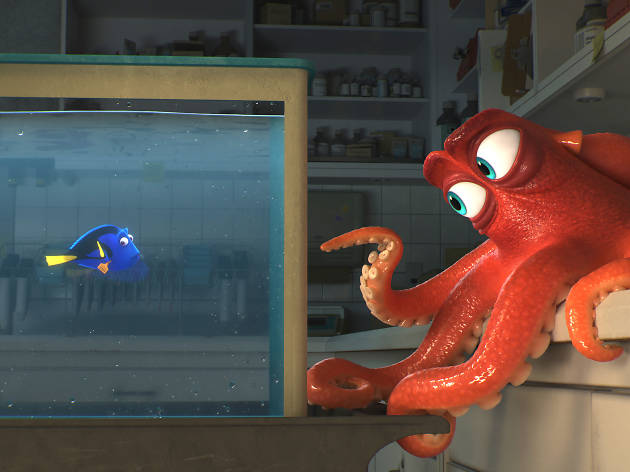 Pixar dives into its past for a sequel that, for the most part, goes swimmingly.

While 'Finding Dory' is crammed with the kind of visual pleasures we’ve come to expect from Pixar, the story doesn’t always reach the heights of invention upon which the animation giant has built its reputation. The film lacks the psychological probing of 'Inside Out', the existential ponderings of 'Wall-E', the gentle, stoic sadness of 'Up'.

But it’s still a moving sequel to 2003’s 'Finding Nemo', following the adventures of Dory (voiced by Ellen DeGeneres), the adorably ditzy amnesiac tang fish, as she hunts for the Californian family she suddenly remembers losing. There’s a neat symmetry here: In 'Finding Nemo', a father, Marlin (Albert Brooks) looked for his lost son (Alexander Gould); now a grown-up daughter searches for her parents. The switch, though, has a resultant lack of urgency: there’s more dramatic tension when a child goes missing than when a parent is suddenly remembered by their adult offspring.

Dory rediscovers her childhood home in a corner of the California Marine Life Institute, a place for oceanic study presided over by the disembodied, omniscient voice of Sigourney Weaver, playing herself (think of those museum-guide gadgets narrated by celebrities). Weaver brings a wonderfully surreal note that'll sail over the heads of younger viewers – she’s a welcome presence in a film that has less-than-the-usual number of gags pitched at older viewers.

In keeping with the film’s subtle celebration of difference, Dory grew up in a place where damaged aquatic life is 'rescued, rehabilitated and released'. This is the thread that powerfully connects the sequel to the original; it’s Nemo’s stunted fin, writ large. In Pixar’s oceanic world, obstacles – both external and internal – are there to be overcome. Nemo keeps swimming, as does Dory, with nary a moment of self-pity. She enlists the help of several critters who also refuse to let their disabilities hold them back, like Destiny (Kaitlin Olson), a myopic whale shark, and Hank (Ed O’Neill), an octopus that’s one tentacle short of a full set.

The CGI rendering of Hank’s chameleon-like abilities as he blends in with his surroundings is spectacular, and it recalls the transparent wonders of Marlin’s jellyfish encounter in Nemo. Pixar’s wizardry is baked into every detail, from the sun-dappled ocean surfaces to the underwater visuals that border on photorealism. It’s unforgettable stuff. A trilogy might be pushing the franchise too far (does the world really need 'Finding Marlin'?), but Dory’s journey of self-discovery makes for a worthy follow-up.