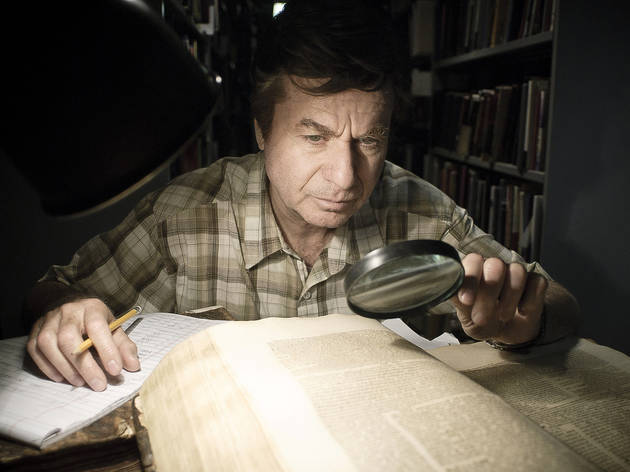 Since this comedy is about dueling Talmudic scholars who happen to be related, an old Yiddish proverb comes to mind (forgive the translation): "Small children, small problems; big children, big problems." The wizened Eliezer Shkolnik (Bar-Aba), an overlooked toiler in academia, fumes while his middle-aged son, Uriel (Ashkenazi), reaps unusual celebrity for a professor---making TV appearances and milking the praise that comes his way. Both of them covet the elusive Israel Prize, a career honor; so when the call finally comes to the elder Shkolnik, he assumes that the panel means to right a longtime wrong. Nope. As his son soon privately realizes, it was intended for the younger man. But how to tell Dad, lost as he is in the throes of belated glory? Meanwhile, Uriel's own son, a teenage slacker, is having a hard time getting off the couch, which infuriates his preoccupied father.

Director Joseph Cedar somehow makes all of this enormously entertaining. He employs Wes Anderson--like montages of dusty pages and bearded pronouncements, paired with an elaborate sound design that underscores the head-bound nature of deep thinkers. (There's also a sham of an awards ceremony that would make Fellini proud.) Footnote has a very slender joke at its core: the notion that the world of scholarship is so hermetic that its lifelong practitioners fight like animals over any meager scrap of praise. If you're smiling in recognition at that last thought, then this Oscar-nominated movie is definitely for you. If not, you may still be able to appreciate the zest the filmmaker imparts to a seemingly serious subject. Cedar's idiosyncratically brilliant script also has a moral question at its heart: Is lying to spare someone's feelings ever justified? Surely the Talmud has a thing or two to say about that.